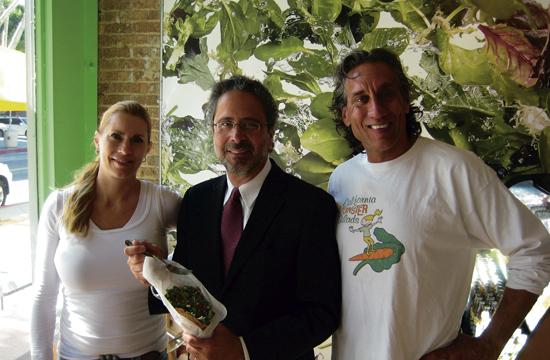 A bevy of salad shops has sprouted up around Los Angeles, such as Greens Up!, California Monster Salads, Mixt Greens, and Saladish. This new crop of salad shops quickly serves up big, healthy salads the way you like it, for around $10.

California Monster Salads in downtown Santa Monica is one salad shop that bloomed from a love story.

Owner Daniel Radell told The Mirror that opening a salad shop was the dream that he and his wife shared during a time when she was battling cancer.

To get more medical treatment, the couple had moved their family from Southern California to Palm Beach, Florida. There they found a build-your-own salad shop they liked, and talked about opening a similar shop back in California.

“When you get better, we’re going to open up a place like this,” Radell told his wife.

Radell’s wife has passed on, but the pair’s dream lives and grows at California Monster Salads, which opened in June on Santa Monica Boulevard near Fourth Street.

“On the day we opened the store, we had so many customers we ran out of food,” Radell said.

Radell had looked at many Westside locations for his salad shop but lost out to competition from established businesses and fast food companies.

“Every realtor wants someone who’s established,” he said.

He credits the city’s strict fast-food zoning rules for his success in claiming a location in busy downtown Santa Monica.

The small shop is bright and airy, and the service friendly.

Radell and business partner Stacy Mahaffa are usually at the shop, making salads, greeting customers and helping them navigate the menu.

There are outside tables and a few indoor seats, but many customers move in and out of the shop quickly, taking their salads home or back to their desks at lunchtime.

Or you can create your own salad ($8.75) by choosing your greens (mixed baby greens, romaine lettuce, arugula, spinach, or kale) and five toppings from a variety of veggies, fruits, dried fruit, nuts, and cheeses.

For $2 extra, you can add a protein topping such as roasted chicken, tuna salad, or wild-caught red salmon.

If you’re eating on the run, you can eat your salad out of a bread cone for the ultimate in sustainable portability – no packaging needed.

The thin bread is made in-house and comes in two flavors – sunrise sweet or sun-kissed savory.

Mahaffa creates the tasty salad dressings in-house without added salt or sugar. “The dressing makes the salad,” said Mahaffa, who plans to bottle the dressings and distribute them to retail stores.

The flavored lemonades ($3.50) are a refreshing way to drink your veggies. They’re juiced in-house daily and come in flavors like kale, cucumber mint, pineapple apple, and carrot tangerine.

Santa Monica Mayor Richard Bloom stopped by the shop for a belated opening ceremony on Oct. 10.

After cutting the ribbon, the mayor sampled a salad cone.

With three months under his belt, Radell is forging ahead with catering and home salad delivery service, and a reward program for frequent customers.

For every $100 a customer spends at the store, a $10-off certificate will automatically be rewarded if you’ve registered at the shop with your phone number.

“We want to open five shops in the next five years,” he said.

By mirrormmg October 18, 2011
in Life and Arts
Related Posts