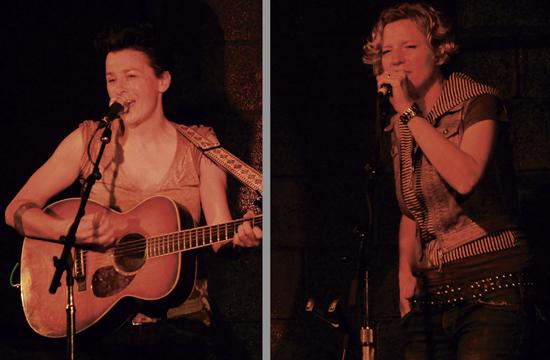 Some folk artists are lucky to live through life’s little mistakes and unexpected turns, but few are able to make it into a workable lifestyle and make a successful career out of doing it.

Being the bad girls of folk rock seems to be the key.

McCabe’s Guitar Shop has been around since 1958, and has provided the community with the largest collection of stringed instruments in the area as well as providing live music on select nights.

“Catie’s played here a few times already,” said McCabe’s event booking manager Lincoln Myerson. “And Melissa’s played here once. They are separate incarnations and this is their first time playing together at McCabe’s.”

Curtis, who just released her new song “Highway del Sol,” went on stage with her harmony microphone that she used to record and play back her own harmonies, which added a novel effect to her voice.

Curtis interwove the reflective theme of relationships and the possibility of having doubts and troubles, as well as wanting something that you can’t have, into her melodic lyrics.

In between songs, Curtis shared a current moment in her life, as a lesbian mother of two, when another child asked her child how she had two moms. Her child’s response was that they were married. Curtis then went on to tell the story about the time this same child came over to her house to play with her daughter and asked her the same question.

To Curtis’ response of gay marriage the child then said that Curtis, “reminded her of her aunt.”

Curtis’ response was, “Well, maybe your aunt is gay.”

To which the kid responded, “No she can’t be gay, she’s not even married.”

Ferrick joined Curtis for a song before singing on her own, only to be rejoined by Curtis for an encore set.

Ferrick lived in West Hollywood for eight years before returning to the Boston area and some of her original followers were in attendance at McCabe’s.

She played her songs “You Let Me Be” and “Bad Habit” during her set.

“Bad Habit” is a song about sending telepathic thoughts to somebody who doesn’t like you so that they will one day come around and change their mind.

“I’m trying to make you think of me and making you mad kind of gets me off,” sang a snarling Ferrick during the song “Bad Habit.”

Ferrick went ahead and followed Curtis’ lead, telling an anecdote to entertain the crowd in between tuning her acoustic guitar.

One story she told was of the time she realized how miles per hour worked.

“In elementary school they didn’t explain it the right way for somebody like me, and when they did those things like when the train leaves the station at three or whatever going like 62 and by that time I’m done,” said Ferrick over the microphone. “And, I’m like, I don’t know what you’re talking about. (But) if somebody had just said to me that there are 60 seconds in a minute (and) if you are going 60 miles an hour and 60 minutes is one hour, (then) that’s 60 miles an hour, (and) I would have been like ‘Oh ok.’ So I was driving down the freeway one time with my drummer Brian at the time and (I thought to myself) so if I’m going 70, I can do 210 miles in three hours! The light dawned on me that moment and that was a big one.”

The highly responsive crowd seemed jubilant to the storytelling and music playing of both Curtis and Ferrick.

“New England has one of the best folk scenes in the country,” said Myerson about the solid hard-strumming folk sound of Curtis and Ferrick. “They have a supreme advantage because there are lots of little towns that are close to each other and you actually can be a troubadour and hop in a car and drive an hour away and be in a completely different town. (In comparison) if you play every week in LA, people get tired of you really fast.”

By mirrormmg October 29, 2011
in Life and Arts
Related Posts