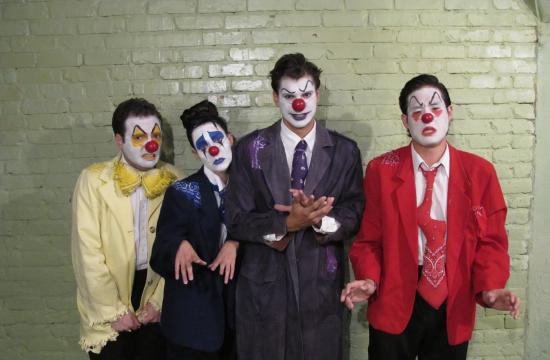 Much can be said about “Four Clowns,” conceived and directed by Jeremy Aluma.

It’s award-winning, has a national fringe tour behind it, and hits near-sellout status with every performance done.

It can even be said that it’s never the exact same show twice (as part of it is improvised), which makes it brilliant.

“Four Clowns” tells a story that we have seen many different ways, but most certainly with a twist. It takes you on a physical and emotional journey of the human life, all the while playing off of the age-old wives tale that “Laughter is the best medicine.” It takes you through the universal struggles and flight all humans go through in their life cycle, from childhood through adulthood.

The greatest achievement “Four Clowns” is that is brings together great chemistry between the four central characters. Kevin Klein (Mischievous Clown), Raymond Lee (Angry Clown), and Amir Levi (Nervous Clown) complement each other very nicely, especially when you add Sad Clown (played by the boisterous Alexis Jones). Jones steals just a little bit of thunder from her co-stars by the way she interacts with the audience to keep her persona going. She’s not to be outdone by Levi’s Nervous clown who also is very audience-energetic at times. One of the ways they demonstrate the chemistry is the hilarious, not-soon-to-be forgotten lyrics of original songs they use as transitions as they “phase” into the next part of life.

Normally taboo subjects that are presented in “Four Clowns” get tackled in a way that even the tough would appreciate. Gratuitous sexual situations, suicide/depression, objectionable language, and even self-gratification are addressed in such a laugh riot, that it works. Even things that the arts community normally steers clear of, such as complete audience interaction, no blackouts, and live music, would be given two thumbs up by the toughest of the tough.

The only weakness in the show is perhaps one that has been overlooked by all: They are clowns. In America, eight percent of Americans have a phobia of clowns. That’s too bad, because with a show like “Four Clowns,” people who see it might just put their fear aside. With five fringe festivals and a national tour behind them, and another national tour fast approaching in 2012, “Four Clowns” is something not to be missed. Aluma, with his stylish directing capability, has been bringing great twists and stage on modern day contemporary pieces (“Sister Mary Ignatius Explains It All To You,” “The Last Days of Judas Iscariot,” and “In Arabia We’d All Be Kings,”) for years to the Greater Los Angeles area. Is it any wonder that an original would be just as superb?

By mirrormmg October 6, 2011
in Life and Arts
Related Posts