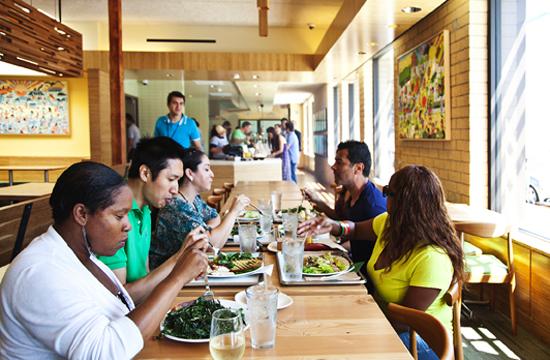 A new Tender Greens restaurant has come to Santa Monica at the corner of Second Street and Arizona Avenue, a location formerly occupied by the Todai Lighthouse all-you-can-eat Asian buffet.

Open barely a month, the establishment is busy with local diners of all stripes who’ve come to check out the new restaurant on the block.

“I like coming here. I’ve eaten here seven of the last eight days,” said Colin Garr, who works nearby.

Since opening in 2006 at its original location in Culver City, Tender Greens has been expanding and attracting diners who like the restaurant’s way of serving simply prepared, locally sourced ingredients in a casual, no-frills setting. Nothing on the food menu is more than $10.50.

“I’m a giant fan of Tender Greens because everything is so fresh and delicious, there are so many options, and it’s very reasonably priced. I’ve been to all of them. This is my first time in the Santa Monica store,” said West Hollywood resident and realtor Amy Byer. “If you just get the salad with no soup or dessert, it’s healthy, reasonably priced, and you’re full.”

The Tender Greens restaurant concept is the brainchild of business partners Erik Oberholtzer, Matt Lyman, and David Dressler, who met while working at Shutters on the Beach hotel in Santa Monica.

They were the same age, at the same stage in their careers, and ready to take a chance and strike out on their own.

“We wanted to make the type of restaurant where we would go on our days off,” Oberholtzer said. “We pool a lot of the quality and technique from the (hotel dining) world that we’ve come from, but (we charge) a neighborhood price.”

From the beginning, Oberholtzer said they wanted to be here in Santa Monica.

“It just took an economic collapse to free up some real estate for us,” he said. “What was bad for the economy ended up being good for us; the right location came up. So we’re home again; we’re back.”

Salad greens are impeccably fresh; there’s no tired lettuce on your plate here.

Most of the veggies served at the Tender Greens restaurants come from Scarborough Farms in Oxnard, although some, like the Weiser Farms potatoes and carrots, come from the Santa Monica farmers’ markets, said Executive Chef Rian Brandenburg.

There are a dozen main dish “big” salads ($10.50) like the Tuna Nicoise or the Chipotle Barbecue Chicken, and half a dozen small veggie salads ($5.50), like the Baby Arugula with Tomato or the Kale Salad with parmesan.

The beef is free of hormones and antibiotics, the fish is sustainably caught, and the chicken is cage-free. You can have your protein in a sandwich, on a salad, or hot on a plate with a side of mashed potatoes and salad. The menu is rounded out by soups ($4), and cookie and cupcake desserts ($2 to $5) made in-house by Chef Rian’s mom.

Service at the restaurant is basic and generally quick. Walk in, order your food at the counter, and see your order being swiftly prepared as you make your way to the cash register, where you receive your order on a tray. There’s not much space between the entrance and the counter, so a line forms quickly, especially at lunchtime, when there can be a backup at the cash register and a line of customers spilling along Arizona Avenue.

The former restaurant’s dark interior has been opened up with lots of light and windows. Wood from the site’s previous restaurant has been recycled here into tables, walls, and light fixtures. Artwork by the artist Jeremyville adds a playful vibe that extends the farm-to-table theme.

Given the restaurant’s location at the western end of the downtown farmers’ market, there are plans to begin a Wednesday Farmers’ Breakfast where the farmers can dine on eggs, potatoes, house-cured bacon, and breakfast pastries, said Oberholtzer.

The auspicious beginning of Tender Greens in Santa Monica just might be due to the blessings of seven Tibetan buddhist monks who were invited to the restaurant to perform a blessing ceremony about a month before opening on Sept. 10. Wearing orange robes and headgear, the monks chanted and played musical instruments. After the ceremony, the monks dined on Happy Vegan salad and other Tender Greens dishes.

“They absolutely loved it,” said Chef Rian. “They took the food with them when they left.”

By mirrormmg October 8, 2011
in Life and Arts
Related Posts