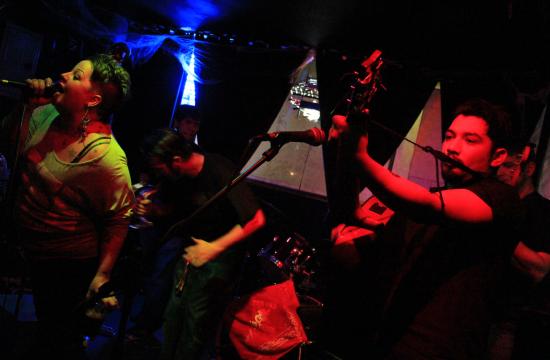 The Bad Bad Things ushered in the Halloween season with their spooky punk rock sounds at Trip on Lincoln Blvd. in Santa Monica last Saturday night.

They were part of a punk rock fest that featured a good number of bands playing for a large crowd of excited revelers.

The stage lighting at Trip was cryptic that illuminated the faces of the musicians on stage with cool blues, hot reds, and envious greens as they performed against a black curtain frame with spider webs in the corners and a small steel chandelier hanging from the ceiling.

“Halloween is always a good time,” said Kryss Deetch lead singer of the Bad Bad Things. “We have songs about dead girls, demon girls, and our newest song is called ‘Something Scary.’”

The Bad Bad Things performed “Something Scary” on RGB Halloween punk stage and proved they were made for the venue.

Their songs, “Dead Girl,” “Something Scary,” and “Lovely Demon Girl,” were a hit with the crowd, and people could be seen singing along to their punk flavored music.

“I wouldn’t say that we are a punk band but we have our moments of punk styles,” said Deetch. “Sometimes not all punk styles want to be fast and crazy 24/7 so we slow it down for a little bit and speed it up when we need to.”

“(We have the) punk rock attitude but (we’re) not punk rock music,” said Flores. “We do blues, reggae, and all the genres but there is still the attitude there. We’re all about giving the finger, and then cheers, and sing along with the chorus.”

The bluesy punk rock and roll played by the Bad Bad Things Flores defined as “roots” music — music that stems from roots, reggae, rock and roll.

Backup vocalist, percussionist, and tambourine player Casey Bennett gave a few reasons why he joined The Bad Bad Things after playing in a number of other bands in the Santa Monica area.

“When I came into this band I wanted to try out new things and I didn’t want to sound like every other band,” said Bennet who gamut of instrumental skills ranges into spoons, shakers, and even a jaw harp. “Our lead singer (Kryss) has an amazing voice and it’s all about that mélange of music we all bring to the table and what it creates.”

The “jaw harp” that Bennett plays on stage is unbecoming of that strictly punk style that normally consists of bass, guitar, drums, and a screaming singer.

“(The jaw harp) looks like a horseshoe that is closed together that you put in between your teeth,” said Bennett. “It’s like a tuning fork and it vibrates against the sound of your teeth and it makes this twangy sound giving off an eerie sound.”

This “twang” creates eerie sounds and sets The Bad Bad Things apart from other punk rock bands putting them in the realm of the Danny Elfman world of Oingo Boingo.

“We have something for everyone,” said Deetch whose influences include Elle Fitzgerald, Billy Holiday, Blondie, Amy Winehouse, and Joan Jett. “Whether you like it fast and hard or if you like it a little more slow and sexy.”

“The world is unique,” said Flores whose influences include the Beatles, Johnny Cash, reggae, and roots music. “We have Internet. We have I-Pods, and I can listen to anything I want to listen to so everybody I listen to-and the whole band listened to as kids- I -or we- can now click on any You Tube video to listen to any song we want to listen to. So we are a variety of everything, and every genre you can think of.”

Flores love of music is infectious with the other members of The Bad Bad Things and each member feeds off the other’s energy recreating that initial vision and path of lost fusion bands like Sublime.

This may be the reason why their music is has caught on with so many of their loyal fans who seem keep coming back concert after concert.

But songwriter Flores is humble.

He attributes all the music he writes for the band, and its success on stage, to the rest of his band along with the feeling that he would be nowhere without them.

“If it wasn’t for them I would be playing at some coffee shop singing, “Uno mas tequila, uno mas chiquita and it would be horrible. They (the other members of the Bad Bad Things) add the layers on. It’s what the Bad Bad Things are.”

“We’ve known them a long-long time and they put on a hell of a show,” said John Decoster, owner of Trip, who was not only excited about the turnout for this event but was looking forward to the upcoming Halloween weekend as well.

“We are going to have six different (local) vineyards on site that are going to be here on Saturday, with the owners of the vineyards pouring (wine) and proceeds going to Heal the Bay,” said Decoster. “(Like tonight) we have some great musicians that will be there.”

By mirrormmg October 28, 2011
in Life and Arts
Related Posts