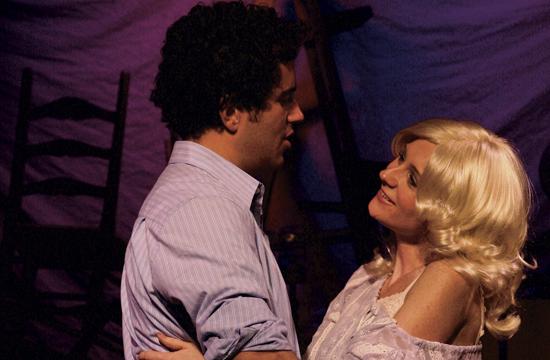 To use a medical metaphor, The Los Angeles premiere of James Sherman’s comedy “The God of Isaac,” presented by the West Coast Jewish Theatre, could be described as “the operation was successful but the patient died.”

That said, under the sharp direction of Darin Anthony, the cast gives a uniformly professional, entertaining performance, bringing to life a play that does not have a single original idea, thought, or word. What Sherman has written instead is a play filled with recycled Jewish stereotypes spewing jokes that have been around for years.

But to the story: The protagonist, Isaac Adams, wonderfully played by Adam Korson, is a Chicago journalist struggling with his Jewish identity which seems to have been suddenly precipitated by a proposed Nazi march in Skokie, Illinois. Bereft of his ethnic identity, Adam blames it on, who else, but his overbearing mother, played with appropriately strident predictability by Karen Kalensky, who is an audience member and frequently interrupts Isaac’s dialogue to interject the stereotypical Jewish mother’s litany of suffering, accusations, and complaints. This theater device worked for a while, but soon became redundant and intrusive.

Isaac is married to Shelley, the quintessential “Shiksa Goddess,” (non-Jewish, gorgeous blonde who loves sex,) played quite believably by Corryn Cummins. She loves her husband but does not want to give up her lucrative modeling career to have a baby. In her innocence, she cannot quite understand why making a sandwich on white bread with Oscar Mayer salami, using mayonnaise instead of mustard, would offend the sensibility of any respectable Jew. Much to Isaac’s chagrin, Shelley unwittingly uses the expression “I Jewed him down,” which results in an unpleasant argument.

Throughout the play, there is a letter exchange between Adam and an old Orthodox girlfriend played nicely by Jennifer Flaks who, guess what, is unhappily married to a successful lawyer who doesn’t spend enough time with his family, including not attending services on a regular basis.

To round out the cardboard characters, we have the wise old tailor/concentration camp survivor very well played by Peter Van Norden, and Jason Weiss, who effectively plays multiple roles including yes, a representative of the Jewish Defense League (JDL.) Let no familiar stone go unturned.

An alumnus of Chicago’s The Second City, Sherman obviously has a comic bent but missed a real opportunity to explore, you should pardon the expression, in an original way, an assortment of Jewish subjects including the challenges of mixed marriages, less overt examples of anti-Semitism, and the legacy of the Holocaust. Instead, he perpetuated the basest stereotypical examples of being a Jew. It is a tribute to the director and talented ensemble that the performances transcended the limitations of the script and actually presented an amusing evening of theatre.

By mirrormmg October 14, 2011
in Life and Arts
Related Posts