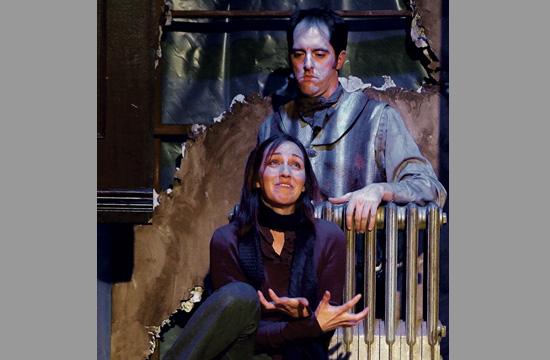 A widowed mother and a child in mourning, a lady with more cats than there are U.S. states, Justin Timberlake and Harrison Ford – did that get your attention? How about a talking house? Every once in a while theater comes around that you just can’t explain until you’ve witnessed it firsthand.

“Crumble (Lay Me Down, Justin Timberlake)” can be described in one word: Brilliance.

Local and well-known director Jeremy Aluma (award winner for best revival of “The Last Days of Judas Iscariot;” and conceiver of “Four Clowns”), as part of the Sacred Fool season, brings the masterpiece “Crumble (Lay Me Down, Justin Timberlake)” to the Los Angeles area. Crumble is written by Sheila Callagahn, who has a notch for writing simple stories that tell themselves through emotion and dialogue.

“It tracks an emotional journey of the relationship for a single mother….while being very relatable to all facades of life,” said Carrie Keranen, who plays the mother. Crumble’s synopsis is simple and intriguing: A year after the untimely death of Janice’s (Kate Wronoski) father, she holds spiteful conversations with her dolls, while her mother suffers panic attacks and their neglected apartment begs for attention. When their celebrity crushes – Justin Timberlake and Harrison Ford (both played by the handsome John Halbach who is making his Los Angeles stage debut in the production) are the only ones who can draw them out of their shells.

From the emotional acting and staging, to intricate details of the old apartment – every crook, detail, and squeal – is represented. In fact, throughout the entire play, there is the faint sound of a mouse or rat. Some may argue that the only weakness that Crumble brings is that laughter can overshadow the serious notes and themes brought to the table. In reality, this is one of its greatest strengths. The cast, under Aluma’s masterful direction, is riveting in the way it is able to keep the sorrowful undertones alive.

While the intensity of Kernanen and Wronowski is enough for any director to be happy, Aluma delivers the one-two punch by having two secondary characters that carry equal weight. Barbara (played by the charming and boisterous Alyssa Preston) and the Apartment (as portrayed by Brendan Hunt, an LA Stage Alliance Ovation winner) bring a new level of comedic sadism. While Preston plays the cliché old cat lady to a T, she brings a charisma to the stage that makes her humor the voice of reason. Hunt, who also provides comic relief, delivers the opening monologue; supplements Preston as the Lucy-Ethel punch – one would not work without the other.

“It’s a unique theatrical show in the way that poetic language is presented in a contemporary show,” says Halbach.

“Crumble (Lay Me Down, Justin Timberlake)” continues at Sacred Fools through Dec. 18. Shows are Friday and Saturday at 8 p.m., Sundays at 7 p.m. Sacred Fools is located at 660 North Heliotrope Drive, Hollywood.

By mirrormmg November 30, 2011
in Life and Arts
Related Posts