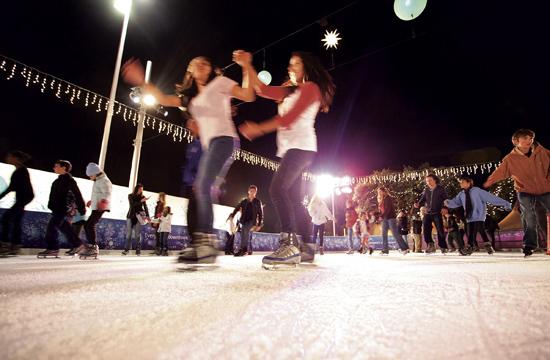 It may never snow in Santa Monica, but that has not stopped a parking lot on the corner of Arizona Avenue and Fifth Street from being converted into a winter wonderland ripe for ice skaters yearning to celebrate the holiday season.

“It’s evolved quite a bit (in the past five years),” Rawson said of ICE at Santa Monica. “Over the years it has grown into a real Santa Monica tradition. There’s something really unique about it. You have this amazing juxtaposition of being in one of the most amazing beaches in the world, ice-skating.”

With a crowed of nearly 500, Rawson’s comments were epitomized by two on-ice performances at the grand opening; the duo skating team of Ashleigh Cahn and Brandon Larcom, followed by the California Gold Synchronized Skating Team.

Completing the formal program was Lipinski, who escorted the first skaters – children from the Santa Monica Boys and Girls Club – onto the rink. For the next four hours, skaters of all ages and size joined on the ice as DJ Dlux played the latest party and dance tunes.

Lipinski, a former professional ice skater, who now commentates on NBC and travels the world as an ambassador to her sport, was thrilled to support the opening of ICE at Santa Monica.

“You don’t think of ice rinks, winter time, and Christmas all those things you get on the East Coast,” Lipinski said. “Out here, you think of palm trees and the beach. I think it’s really awesome that we have a rink out here. It gives kids the opportunities to get out on the ice, and, you never know, maybe a little champion somewhere.”

The City of Santa Monica hopes to have a permanent ice-skating rink that would double as an open recreation space after the holidays.

“For the time being, the rink will stay pretty much the way it is. We’re not talking about expanding the size. This actual site will be redeveloped by the City of Santa Monica,” Rawson said. “I am proud of the fact Downtown Santa Monica created a tradition that’s been so embraced that it will end up in a permanent facility, and it will be here for generations.”

While it may indeed be some time before it turns into a permanent facility, ICE at Santa Monica will continue through this holiday season in its current location in the parking lot at the corner of Fifth Street and Arizona Avenue in the Downtown now through Jan. 16.

Admission and skate rental is $12. Parking is available in the surrounding parking structures.

For more information about ICE at Santa Monica and special events occurring throughout the season, visit http://www.iceatsantamonica.com or facebook.com/downtownsantamonica.

By mirrormmg November 18, 2011
in Life and Arts
Related Posts