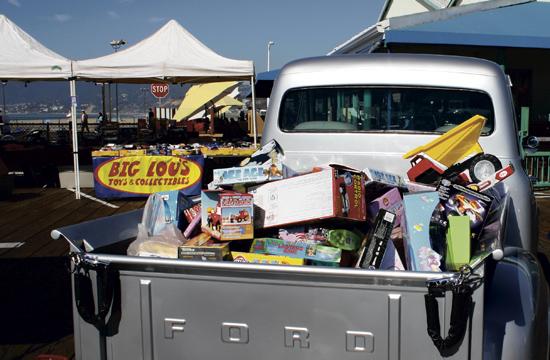 The Santa Monica Pier hosted a bunch of tough guys with big hearts last Saturday when The Dukes Car Club held its annual Classic Car Show and Toy Drive with the beach as its backdrop for the event.

From 9 a.m. to 5 p.m., local artists displayed pieces of their work while musicians played traditional Spanish music for families who danced while enjoying the sun.

The Dukes Car Club is one of the oldest Los Angles-based car clubs, which has been around since the 1950s. Several other California-based car clubs participated in the event, showing off collections that spanned several decades.

Westside Originals displayed a beautifully restored Chevy Bel Air, not to be out done by The Strays and The Classic Lowriders. These car clubs have long histories of restoring and displaying lowriders at events. Among the most unique cars at the show was Graveyard Mafia with its stand out hearses, one complete with coffin and “body” that stopped people in their tracks.

The car show, now in its seventh year, is organized by Ernie Bravo of The Dukes Car Club. It is held in conjunction with Santa Monica’s Police Activities League (PAL).

PAL is a local organization that works to bring the youth of the community together with the men and women of the Santa Monica Police Department through fun and educational outreach programs.

The event was a shining success with a classic Ford pickup full of toys collected throughout the day.

All of the toys will be donated to local schools and distributed to children in need.

By mirrormmg November 12, 2011
in Life and Arts
Related Posts