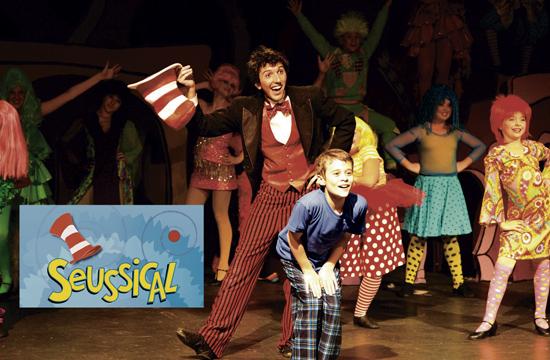 Santa Monica’s Morgan-Wixson Theatre was full of imagination and excitement last weekend for the premiere of its charming new production of “Seussical,” which has performances every Saturday and Sunday at 2 p.m. through Dec. 17.

“Seussical” is the beloved musical made up of several of Dr. Seuss’s best known stories. The musical is based on the book by Stephen Flaherty and Lynn Ahrens, that follows a host of classic characters through timeless trials of friendship, perseverance, and the power of imagination.

The play opened with a full company rendition of “Oh the Thinks You Can Think” led by the Cat in the Hat, that gave the audience a taste of the fun and excitement to continue throughout the show.

Next, Along came the sparkling residents of the Jungle of Nool. The audience watched the drama unfold as Horton, a warm hearted elephant, hears a “who.” With his giant ears, he is the only animal able to hear the cries for help from a speck of dust containing a world so tiny it is easily brushed off by the larger-than-life jungle creatures.

Horton meets the Mayor, his wife, and son JoJo who live on the tiny speck and promises to stick to keep them safe and out of harm’s way. This is no small task, as Horton comes up against several roadblocks. Meanwhile, down in Whoville, JoJo is up against big problems of his own. He is a troublemaker who “thinks” just a little too much. He is always in the bad books with his teachers and parents because he struggles to find where he fits in.

The story’s strong theme of acceptance resonates with today’s culture. All of the characters struggle with how to be themselves while being part of the group. A delightful example was the story of Gertrude the bird with only one feather for a tail. She longs to be beautiful like the rest of her bird friends in order to catch the eye of her love Horton, who is just too busy saving the world to notice her. She goes to the doctor who prescribes a pill that will make her tail the envy of every bird in the jungle. She is happy at first, but when her amazingly full new tail prevents her from flying she would rather be rid of it than stuck while Horton is in danger. It’s a great lesson learned that what you do makes you beautiful, not the size of your tail feathers.

In the second act, free of her cumbersome tail, Gertrude flies to the Circus to rescue Horton who has been arrested by the Sour Kangaroo and the Wickersham Brothers. Horton is taken back to the Jungle of Nool to stand trial for talking to a speck and “loitering on an egg.” In the triumphant final number, Horton helps the creatures of Nool hear the cries of every “Who” down in Whoville, saving them from certain doom.

The production is a great example of Santa Monica’s up-and-coming actors. The production featured amazing children who bring the story to life with plenty of personality. Grant Venable as JoJo is only 10 years old, but his stage presence is infectious. Like all of the children in the show, he had an enormous amount of fun, and it shows. Other stars include Zoe D’Andrea, as the Sour Kangaroo, who has a voice made to bring down the house and Mary McGowan who glittered as she shimmied about as Mayzie the amazing bird.

This program was made possible in part by a grant from the City of Santa Monica and the Santa Monica Arts Commission.

By mirrormmg November 22, 2011
in Life and Arts
Related Posts