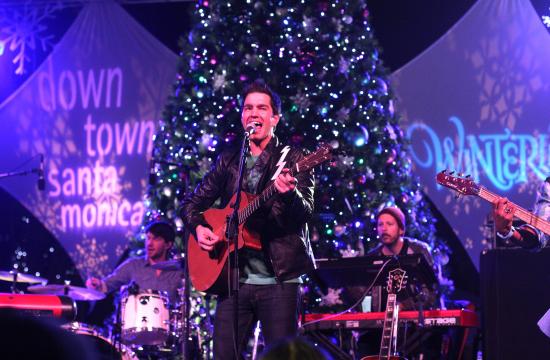 The Third Street Promenade was WinterLit Saturday night on a stage decorated with a Christmas tree adorned with ornaments, lights, a snow maker, and musical artists to kick off the start of the holiday shopping season in Santa Monica.

She riled up the crowd with her reindeer nosed band ushering in some Christmas cheer at the free community event.

“I am obsessed with Christmas,” said a passionate Outen who, with her red Christmas cap, looked like she was born ready for the winter holiday season. “My mom and I are so into Christmas. My mom and I decorate my house the night after Halloween.”

Outen gained an exorbitant amount of attention on Youtube with a view count topping 75 million hits.

In the past year, she has had five of her songs on Radio Disney make the Top 30 countdown including her first single “Goodbye.”

“If you would have asked me last year that I would be performing at the WinterLit (concert) or the Macy’s parade I would have laughed,” said Outen. “I never thought that would happen and I’m excited to see what 2012 will bring.”

Children in the crowd danced and sang along to their favorite Disney songs that included “No Place Like Here,” “If You Only Knew,” “Be Original,” and her new holiday tune, “Song of Christmas Time.”

Since her discovery by Disney on Youtube, she said her life had been a whirlwind.

She said each day was filled with new adventures, parades, and concerts such as Saturday night’s performance on the Third Street Promenade.

“I freaked out when it started snowing,” said Outen. “I was so excited cause I started playing these Christmas songs and they didn’t tell me that it was going to start snowing.”

Young girls in the crowd could be heard shouting, “We love you Andy!” as he took to the WinterLit stage.

Grammer’s hit songs, “Keep Your Head Up,” and “Biggest Man in LA,” have become somewhat of a legend to street performers on the Promenade since it’s where he started his career as a musician.

Since signing with S-Curve Records, he has landed a music video for his song “Keep Your Head Up,” featuring sitcom T.V.’s “The Office” actor Rainn Wilson (Dwight Schrute), and his song is about a long day of performing on the street.

A year and a half ago Grammer was discovered singing in front of the McDonalds next to the WinterLit stage, making this concert a homecoming for him.

“It’s unbelievable (to be back here),” Grammer said. “It really is strange because a lot of those songs I would sing with my eyes closed and then open up and there would be no one on the street. I would be like ‘darn it, I just gave everything I had and no one was even listening.’ And so tonight when I opened my eyes and there was all these people, it was crazy.”

Some people may remember Grammer as that beat boxing street musician who played on the guitar and sang on a microphone.

“(Beat boxing is) basically just a way to add rhythm by myself,” Grammer said. “I had to figure out a way to make the bass, the drums, all of it so people would stop to pay attention.”

People now pay attention as he’s a beat boxing rock star with passion for performance. But just a year and a half ago he was an ordinary street performer hustling to get by each day.

To “make it” on the streets, Grammer even recruited long time street performer Candyman, who Grammer said was “stealing his customers,” to perform with him on the Promenade.

Candyman was at the WinterLit event and took a few minutes to show off a few of his break dancing skills in front of Grammer, which included a back flip, wowing the crowd with his athletic dance abilities in front of the WinterLit stage.

Grammer’s song, “You’re the biggest man in Los Angeles,” is about street life, and even though he likes to reminisce, he likes his new life as a touring musical artist even more.

“You can’t even really think of it that way (and) you don’t think of it like this is going to happen (to me), you just start trying to get what’s right in front of you and if you do that enough, you find yourself in a situation like this, which is crazy,” he said.

Grammer still remains a positive reflection of the best qualities found inside the many street artists who perform for shoppers who visit the Third Street Promenade.

“I had a fun time,” Grammer said. “I would love to come back here next year.”

Until then, his concerts on the Promenade will just have to wait.

By mirrormmg November 27, 2011
in Life and Arts
Related Posts