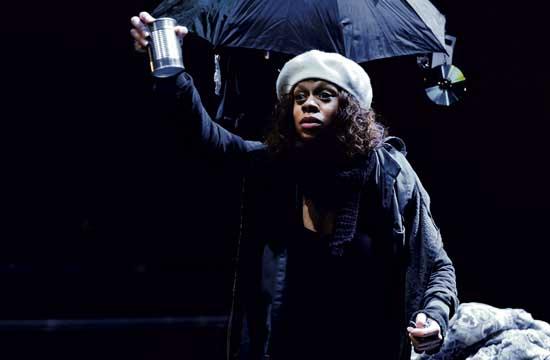 These are some of the elements of Boom Kat Dance Theatre’s production of “Stations: A Los Angeles Holiday Story” currently playing at the Miles Memorial Playhouse in Santa Monica through Dec. 30.

The show is about nine people living in Los Angeles whose lives are interwoven. As their stories are told, the production features a combination of original dance and music based on Christmas classics that comment on the state of the world today.

The show opens with a scene known all to well – a busy shopping center decked out for the holidays teeming with people. Inside is a young couple enjoying a night at the movies.

When the couple leaves, a homeless woman who is cold and alone approaches them. Instead of giving her money, the young woman offers her a plush hat, the first gesture that gives the audience a sense of the heartwarming story to come.

In the second number the audience sees the collapse of the economy while the young woman who gave away her hat giving birth to her first child.

Next on stage are two young Lakers fans listening to the game on the radio. When a third young fan shows up with a basketball signed by star player Kobe Bryant, the youth get in a fight over the prized possession. In a flurry of hip-hop moves during the “fight,” the ball becomes lost. The three spend the rest of the show searching tirelessly for the missing treasure.

As the first act progresses, we see three different perspectives on the holiday season. The young couple’s joy over their new child is not meant to last as the husband is laid off and struggles to tell his wife.

Meanwhile, across town, a wealthy businessman runs his assistant ragged while shopping for a Christmas tree. When he leaves his umbrella behind, the homeless woman finds it and begins to create a Christmas tree of her own.

At the end of the act, the truth comes out about the young father’s job and the news comes that the couple will lose their home in a fury of movement and energy.

While the first act starts slowly, it does set up the main players of the story. The most engaging piece of the show was the opening scene of the second act that’s full of exciting, funny, and touching moments.

Titled “Foreclosed,” it features a troupe of over enthusiastic movers energetically kicking the young couple out of their home. This scene brings some humor to a snapshot of the current American story that’s a reality for so many people.

The show’s pace increases and the jokes keep coming in the scene “Ho-Ho-Ho Delivery.” In it, a very inebriated Santa is tasked with delivering gifts to people all over the city on his tiny motorbike. His travels take him to a rave club where he is tasked with gifting a very large and scary bouncer, but not before being swept up in the flashing lights and music.

In the end, everyone’s problems are not solved, but we do see humanity and good win out over apathy. The now homeless young couple finds refuge in a bus station where all of the characters are brought together by chance.

Drunk Santa gives up his uniform consisting of pillows and blankets under his red suit to make a bed for the infant, an abused baker feeds them cupcakes, and the young Lakers fans offer up the signed basketball. The scene paints a modern nativity scene for us complete with three gifts and a manger.

The production with original concept and music score by Parmer Fuller fulfils a new take on an old story. While it took a while to rev up, the company gave the best performances when they weren’t taking themselves too seriously. The notes of comedy throughout provided a nice balance to help to tell a sad story while keeping the audience engaged.

Thursday through Saturdays at 8 p.m

By mirrormmg December 12, 2011
in Life and Arts
Related Posts