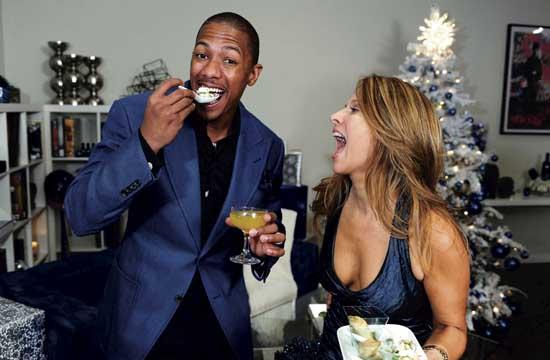 When hosting a holiday party, “Cooking Channel” host Ingrid Hoffmann says keeping it simple is the key to success.

The new father decorated the room in blue and white festive, chic décor and kicked off the official holiday season by hanging his favorite ornaments on the Christmas tree.

Not only did Cannon play chef and mixologist with Hoffmann for the night, he was also the party DJ, keeping the party going with his own holiday play list, which even included a few songs by wife Mariah Carey.

Hoffmann said creating one or two signature drinks for a holiday party was the way to go.

“You don’t need to stock a whole bar,” Hoffmann said. “Set-up a self-serve station, which could be a punch or it could be a drink in pitchers, and then you have glasses, garnishes and ice, and you actually eliminate yourself playing bartender to everyone all night.”

Cannon said SKYY Infusions had helped him become a mixologist.

“I’ve always known how to mix records, but I never knew how to mix drinks, but now I know how to make cocktails like an iron chef,” Cannon said.

He said his favorite was Nick’s Naughty Punch.

“It’s got SKYY Infusion Ginger, some apples, some white wine, champagne, and apple juice – it takes your party to the next level,” he said. “I had never done it before, but now I can make all types of cocktails. If I can do it, anybody can.”

By mirrormmg December 9, 2011
in Life and Arts
Related Posts