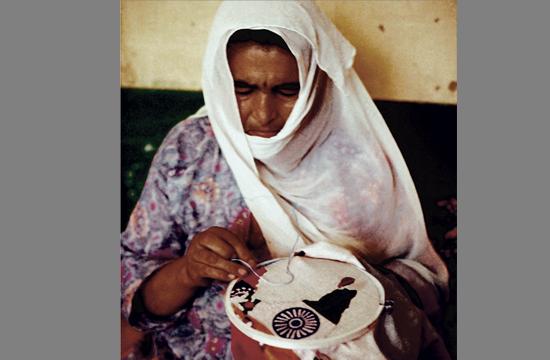 For Santa Monica photographer Randi Malkin Steinberger, it’s been a busy start to the year with three exhibitions currently on show around Los Angeles that spotlight the work of Italian conceptual artist Alighiero Boetti.

The largest of the three exhibitions is at the Fowler Museum at UCLA: Order and Disorder: Alighiero Boetti by Afghan Women.

This exhibition explores the body of work created by Boetti in collaboration with Afghan embroiderers that features about 30 works by Boetti with Steinberger’s photographs showing production in Peshawar and the outlying refugee camp.

Steinberger said she came to know Boetti when she lived in Italy in the 1980s.

She said she jumped at the opportunity when asked by Boetti to travel to Pakistan in 1990 to photograph the women he wasn’t allowed to have any contact with because of cultural differences.

When she arrived, she was told that westerners were banned from entering the refugee camp because there had been an incident several weeks earlier.

“I really wanted to go photograph the women for him because that’s the part he couldn’t see himself,” Steinberger said. “He was such an important figure to them, as he gave a lot of women in the refugee camps work, they didn’t want to disappoint him. They figured out a way to get me in there.”

She said she had to dress in an Afghan garb that she used to hide her camera and went along with two men in a rickshaw to the camp, which had a guarded checkpoint.

“Even though my head was veiled, they knew I was a westerner,” she said. “They said I was there on Boetti’s behalf to pay my respects and they let me in. They probably wouldn’t have liked the idea that I was photographing because they were suspicious of everyone and everything. The Soviets had just pulled out of Afghanistan and they weren’t that trusting of others.”

She was only given one day inside the camp, which she used to capture as many images as she could.

“I shot with high-speed film, no flash, nothing posed, quick, quick, quick as fast as I could,” she said. “I was capturing whatever I could as quickly as I could because I knew I wasn’t going to have a chance to go back.”

When she returned to Boetti’s studio in Italy near the Pantheon in Rome, the pair selected 55 images for a future book.

Now, two decades after the photographs were taken, they have finally been published for the first time to tell the story behind the making of some of Boetti’s most iconic and monumental works.

The Fowler Museum gift shop sells the book “Boetti by Afghan People: Peshawar, Pakistan, 1990” and the exhibition features 25 photographs (some are photos not published in the book), a selection of 29 pieces of Boetti’s work, two films, and about a dozen Afghan pieces. This exhibition will run through July 29. For more information, visit http://fowler.ucla.edu.

The second exhibition Steinberger is currently featured in is Open Book that runs through May 2 at the Italian Cultural Institute of Los Angeles. The exhibit features photographs taken in 1989 over a six-month period and published in Boetti and Steinberger’s book “Accanto al Pantheon.”

Steinberger said the book was divided into eight chapters.

The exhibition at the Italian Cultural Institute features eight large panels with excerpts from the text. Visit http://www.iiclosangeles.esteri.it/IIC_Losangeles for more information.

The third Boetti exhibition underway is called Common Places at LACMA through May 13 that features a photo mural by Steinberger and three objects from the museum’s permanent collection, which transform printed works on paper into one-of-a-kind embroideries.

The three items from the permanent collection are a 17th-century valance, a cigarette silks quit, and a Boetti Mappa.

For the Mappa, a LACMA curator selected one of Steinberger’s photographs that has been enlarged for the show.

For more information about this exhibit, visit www.lacma.org.

By mirrormmg March 14, 2012
in Life and Arts
Related Posts