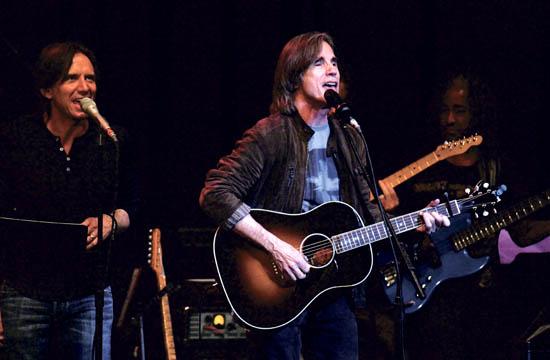 Jackson Browne performed as a special guest on April 21 at the Ninth Annual Benefit Concert in support of the Santa Monica-Malibu Education Foundation’s For The Arts program. The concert, which rocked Samohi’s Barnum Hall, raised $85,000, according to the initial count.

All of the proceeds raised from Saturday’s ticket sales and live auction were donated to arts programs at public schools within the Santa Monica-Malibu Unified School District (SMMUSD).

The SMMEF describes its “For The Arts” program as raising “awareness and an arts endowment to ensure that every student in the Santa Monica-Malibu Unified School District receives a broad introduction to the arts as part of their complete education.”

Also involved with the fundraiser concert was Artists For The Arts Foundation (AFTAF), a non-profit organization “dedicated to helping public school districts sustain and create Arts Programs.” According to AFTAF, it has helped raised money to fund the For The Arts endowment for six consecutive years.

An American musician and songwriter, Browne, whose career launched in 1966, earned a devout following with iconic tracks such as “Doctor My Eyes,” “For A Rocker,” “Lawyers In Love,” “Running on Empty,” “Take It Easy,” “These Days,” and “The Pretender.” He has since reportedly sold 17 million albums nationally.

In addition to his creative talents, Browne was also a recipient of an honorary doctorate from Occidental College and an inductee at the Rock and Roll Hall of Fame in Cleveland, Ohio; he was quite the political activist.

“This is one of my favorite shows to have ever been a part of,” Browne told attendees.

Joining Browne on stage were Glen Phillips of Toad The Wet Sprocket, and the band Venice. Cynthia Fox of 95.5 KLOS served as host.

Venice has performed at the benefit concert since its inception. Last year, America and Richard Page of Mr. Mister joined Venice on stage.

“This is so great, this is like karaoke times a million,” Venice’s Kip Lennon said.