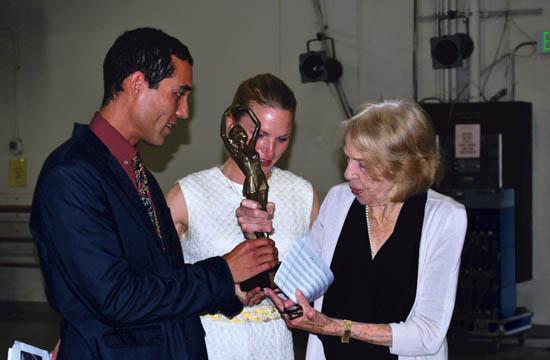 Her resume already includes dances for Leonide Massin’s Ballet Ruse de Monte Carlo, Wassily de Basil’s Ballet Ruse, and George Balanchine’s New York City Ballet. But on May 1, Yvonne Mounsey was here in Santa Monica to accept the first-ever Angel Award bestowed upon her by the American Ballet of Los Angeles for her contributions to the poetic dance form.

The award is meant to be an annual recognition presented to those who make major contributions to the arts. Mounsey was presented with “a 16-inch bronze sculpture of a ballerina on pointe made by Mario Jason” at the Westside Ballet here in Santa Monica.

“I have always loved ballet,” Mounsey said upon receiving the sculpture. “It’s such a beautiful art. I hope we can keep it going.”

Mounsey will be working with the American Ballet of Los Angeles on a pair of new shows it created. One of them – “Viva Pancho Villa!” – is described as “a new light opera ballet based on the life of the Mexican revolutionary known as Pancho Villa.” The other production was “The Great Giselle,” which starred Eddy Hawks, Kat Hawks and Kash Hovey. It premiered at the El Segundo Performing Arts Center in March and featured 20 actors, dancers, and singers.

Among Mounsey’s contributions to ballet: she created the roles of The Harp in “Fanfare,” The Queen in “The Cage,” The Other Woman in “Lilac Garden,” and The Spanish Solo in the 1954 premiere of Balanchine’s “Nutcracker.”

Mounsey was born in 1919 in Pretoria, South Africa and studied ballet in London, New York, and Paris. She current serves on the Board of Directors and is president of the Westside Ballet

By mirrormmg May 4, 2012
in Life and Arts
Related Posts