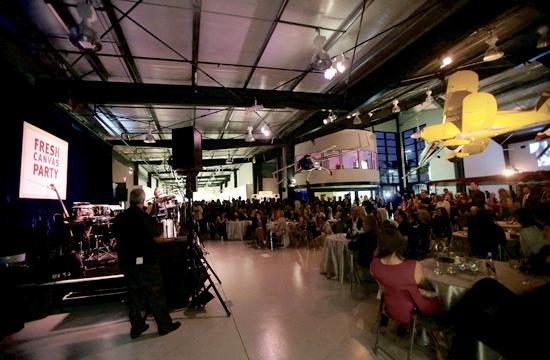 Hundreds of people showed their support for the nonprofit group, Cancer Support Community-Benjamin Center, at its “Fresh Canvas” fundraising event on May 17 at Santa Monica airport’s new Museum of Flying.

The event celebrated the 30th anniversary of Cancer Support Community-Benjamin Center, which began as a small Santa Monica walk-in community center for people who live with cancer. Previously known as The Wellness Center, it has since been re-named and expanded to additional locations nationwide, including Pasadena and Redondo Beach.

The Center helps cancer patients and their families deal with the emotional aspects of the disease. With the idea that no one should face cancer alone, the Center gives support groups, educational workshops, mind/body classes, and individual counseling. Such psychosocial care can help ease anxiety and even reduce the risk of recurrence, but it’s not always available to cancer patients. Services are offered free to anyone who lives with cancer.

To help raise funds for the Center, 30 pieces of original abstract paintings were on display at the event. The paintings were donated by artists Janet Roberts and Billy Zane, both of whom work with eco-friendly material. Roberts, a four-time cancer survivor, told The Mirror that when you have cancer, “you have your diagnosis, your treatments, but it’s the support that really heals.”

Zane – perhaps best known for his role as Rose’s hapless fiancé in the movie “Titanic” – told The Mirror that he found a creative outlet in painting while waiting between takes on the Titanic movie set in Rosarita, Mexico. He said he joined Roberts for this event because “cancer hits home with everyone.”

Under the wings of airplanes suspended from the museum’s ceiling, guests took in the artwork, dined on finger foods, and danced to the hot salsa rhythms of the Louie Cruz Beltran Latin Jazz Ensemble.

Thursday night’s event also paid tribute to comedienne Gilda Radner, who was among the first to walk into The Wellness Center in Santa Monica 30 years ago. Radner was an original member of the “Not Ready for Prime Time Players” on the television show “Saturday Night Live” during mid to late 1970s. She was known for creating such characters as Emily Litella and Roseanne Roseannadanna.

An inaugural Gilda Award – a bowl of cherries – was presented by “Saturday Night Live” alumnus Laraine Newman to comedy writer Alan Zweibel. Zweibel moved the audience to laughter and tears with his acceptance speech as he told stories about working with Radner in the show’s early days, and about her later fight with cancer.

“Gilda was all about having fun,” Zweibel said. “While she was sick, she would talk about The Wellness Center, going there, the people there. The Center brought joy and comfort to her, to know that she wasn’t alone.

“She put on a really good show for the world, but here at the Center she could relax and be funny but also be herself. The community aspect of it was what she craved. She wanted to bring joy to people who were otherwise suffering, and the Center allowed for that.”

Radner died of ovarian cancer in 1989 at the age of 42. She would have been thrilled to know that, after all these years, she still was making them laugh.