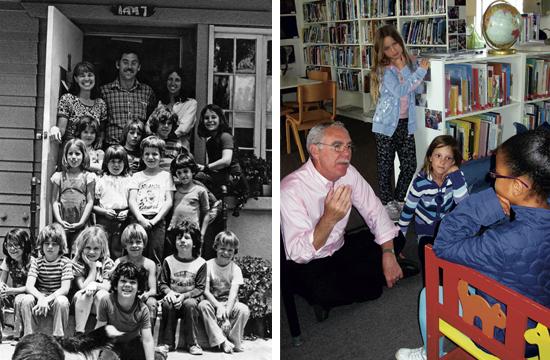 It started as a novel concept with but a few participants at a time of social upheaval. Richard Nixon was still in his first term of office, Watergate had yet to happen, and the Santa Monica-based sitcom “Three’s Company” was still six years away from airing on network television. It was at this time Joel Pelcyger decided to pull the trigger on a whole new approach to primary education here in the coastal municipality. He wanted to open a school “founded on the philosophy of ‘pluralism,’” and carrying “the belief that a community is enriched when individual differences are respected and welcomed.”

Known by its short title of PS1, Pluralistic School 1 will be celebrating its 40-year anniversary Sunday, honoring decades of non-traditional education using “a variety of teaching methods to reach a common goal, as well as diversity in race, income, religion, ability level, and social class among its students.”

The PS1 mission states that it seeks to foster “the acquisition of strong academic and interpersonal skills” in order “to strengthen in its students the image they have of their best selves, and help them become competent independent thinkers open to life-long learning.”

Founded upon the principals of community enrichment, pluralism, and respecting individual differences while working toward a common goal, Pelcyger said PS1 is unlike any other K through 6 experience in Santa Monica.

“What we did was to start a school that was different from any other school,” Pelcyger told The Mirror. “Fitting in is about being yourself. Other schools, you are set up ‘here’s what you have to do to fit in.’ Our belief is that kids, when they first come to school, they have some unique gift.”

When the school first opened, Pelcyger pointed out its first-year budget was $21,000. Only about 30 students, aged five through eight, were enrolled. Now PS1’s budget is seven digits and about 225 students are enrolled.

Since day one, PS1 instructors do not assign grades to their students. Classes are currently taught in two-year ranges with two instructors per classroom. So the Kindergarteners are with the first graders, second graders are paired with third graders, and so on.

“It’s not based upon who is the smartest, but instead everyone has an opportunity to be in a position to be the leaders or elders and to be the disciples,” Pelcyger said.

Each two-instructor classroom carries between 21 and 25 students; each student is also assigned to their own special instructor to work with them outside the classroom, allowing “students to steam ahead or take more time, depending on their individual strengths and needs” while also giving students “an opportunity to learn how to mentor and be mentored, to respect the differences in others as well as themselves.”

“It’s a time for kids to be engaged in learning. The best way is honor them for who they are,” Pelcyger said of his unique elementary school. “I think of it as stages in life: there is the engage phase, the achievement phase, and the success and fulfillment phase. Elementary is the engagement phase. Our kids do not get any grades here, but they do very well at their next phase (i.e. next school).”

Pelcyger added that PS1 students “thrive academically, emotionally, and socially” after moving on to middle school and beyond. He also told The Mirror that many of the school’s graduates have been described “as critically thinkers.”

To help foster community and diversity amidst individuality and unity, PS1 has developed several school traditions. For example, “Circle Time” allows students to interact with professional artists while also promoting their own artistic creations.

Meanwhile, “Dishversity – A Global Feast” allows families to prepare dishes from their own family cookbooks and come together on campus to share traditions and learn more about each other. The food event also includes a display of multicultural costumes, music and dancing.

There is also an “All-School Camping Day” and, at the end of the school year, the “Graduation and Moving Up Day” featuring a collection of mini-graduation ceremonies and a separate procession where returning students are singled out for recognition by their peers.

A graduate of the University of Rochester and Brooklyn native, Pelcyger spent two years teaching elementary students before opening PS1 with his wife, Ellie, in 1971.

In opening PS1, he “envisioned a small, family-oriented school with an academic environment that was challenging, but fun like summer camp.” The school’s former and current students return to the campus this Sunday to commemorate the positive influence PS1 had on their respective lives.