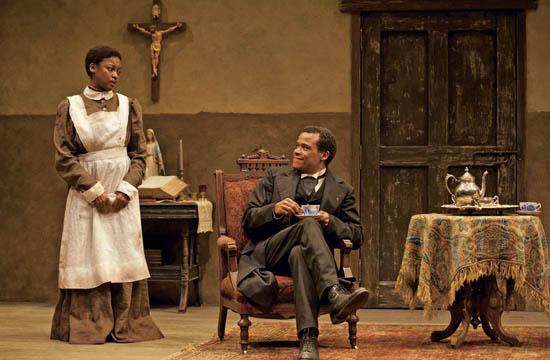 Attention theatre lovers! There is a world premiere production on stage at Center Theatre Group’s Kirk Douglas Theatre that you absolutely must see. A CTG joint production with the McCarter Theatre Center, based on the campus of Princeton University, and Chicago’s Goodman Theatre, “The Convert” by Danai Gurira, is a riveting drama set in the late Nineteen Century in Salisbury, South Africa (today known as Harare, Zimbabwe).

With enough comic relief to allow you to catch your breath, the fascinating story revolves around Chilford – magnificently played by Leroy McClain, who plows into the deepest recesses of his character’s soul with mercurial transitions – and Jekesai – played by a most talented Pascale Armand and gives a devastatingly haunting performance, delving deeply into the multiple layers of her complex character, discovering every subtle nuance and sub-textual element of this most fascinating young girl. Her performance is flawless as are the performances by the rest of this commanding ensemble.

We first meet Jekesai as a barefoot, bare breasted young tribal girl who is fleeing an arranged marriage to a much older man. She runs into the safety of the arms of her aunt, Mai Tamba, Chilford’s housekeeper, played by a delightful Cheryl Lynn Bruce.

Mai Tamba has learned how to play the religion game and seems to embrace Catholicism in front of Chilford, but when he’s not around, hides tribal relics around the house to protect everyone from evil spirits. Miss Bruce executes her character’s devious behavior with crack comic timing.

A devout Catholic and aspiring to becoming the first black priest in South Africa, Chilford is a well-educated, articulate gentleman, and although the son of a witch doctor, is seemingly devoid of any vestiges of his tribal youth, and has moved up the ranks to become mediator of native affairs. His goal is to try to teach the natives to be civilized and to emulate the beliefs of the white intruders. After an amusing initial line of questioning by the very controlled Chilford – which Jekesai answers in her tribal dialect, translated into English by Mai Tamba – he decides to take Jekesai under his wing and make her his protégé. Beginning with giving her the Christian name of Ester, he systematically strips her of tribal traditions and instills in her a deep belief in Jesus Christ as fountainhead of the Roman Catholic religion. Throughout the course of the play, Ester, who is a quick study, transitions from being unable to read or write, to becoming educated and an articulate devotee of the Catholic religion, assigning any blessings she has gained to her belief in Jesus Christ.

Her newly found religion does not sit well with her volatile brother Tamba, intensely played by Warner Joseph Miller, who warns her of impending danger as violence against whites, who have colonized their land, and blacks who have embraced the white man’s ways, breaks out in nearby Mashona and pleads with her to remember her roots and return to the safety of the tribe. Rounding out her family is Uncle, played by Harold Surratt who clings to tribal ways and is determined to return Jekesai to the tribe so she can comply with the arranged marriage.

A pivotal character in the play is Chilford’s best friend Chancellor, wonderfully played by Kevin Mambo. Chancellor, who holds a high post, is also very well educated and articulate. More freewheeling than Chilford, although engaged to the elegant, well schooled, fashionably dressed, Prudence, played with just the right amount of a condescending air by Zainab Jah, is not above having an occasional dalliance. Chilford, Chancellor, and Prudence all left their tribes at very young ages to get educated and have seemingly, at least on the surface, lost all tribal instincts, having adopted Western culture.

As the action moves forward, Ester continues to grow and can now quote passages from the bible going as far as to correct a priest who has misquoted something. Chilford later chastises her saying that even though she’s right, she cannot correct him “because he is white.”

With the deft hand of a surgeon, the playwright slowly peels away the façade of each of the characters down to their pure essence. Miss Gurira delicately explores the notion of you can take the girl (or boy) out of the tribe, but no matter what transitions you might go through, you can’t take the tribe out of the girl – an interesting philosophical/sociological idea.

So many times, two-act plays have strong first acts with weak second acts, but in the case of the brilliantly written, but rare three-act play, “The Convert,” guided by the stunning, seamless direction of Emily Mann, and supported by an excellent technical team, the action gradually builds, with the final act delivering a powerful, unexpected knock-out punch as the proceedings grow dark with shocking actions and consequences. The play is a fascinating exploration into human behavior that will leave you sitting on the edge of your seat.

By mirrormmg May 1, 2012
in Life and Arts
Related Posts