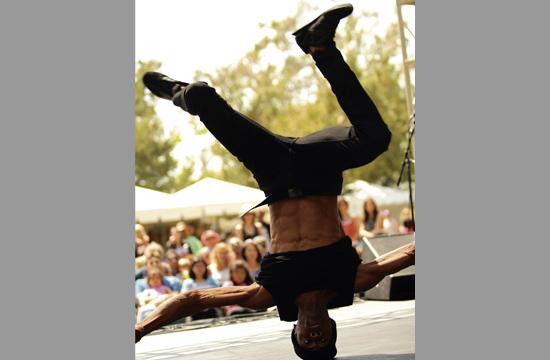 Stuntman and street dance artist Jacob Lyons, a B-boy better known by the name, “Krazy Kujo,” stole the show with his soul control crew of all-terrain dancers with his innovative dance company called Lux Aeterna during a performance on the Ocean Stage at the 21st Annual Santa Monica Festival at Clover Park last Saturday.

The festival included arts and crafts booths, yoga, live music, and interactive workshops geared at displaying the city’s strong commitment to sustainable living and being eco-friendly when interacting with the environment.

But the highlight had to be the dancers, who even though known as legends to many of their dedicated fans, added a new form of dance flavor to Clover Park as they displayed talents labeled as the combination of “urban dance and contemporary circus theatre.”

But B-boying is actually a form of street dance strongly intertwined with hip-hop culture that is often incorrectly labeled as breakdancing says Lyons.

In High & Mighty’s music video B-Boy Document 99 featuring rapper Mos Def, Def describes street dance parties that have B-boys dancing with the line “the party was poppin’ and the breakers were breakin’,” providing an adequate street description of the movement.

Lamonte Tales Goode, a B-boy in his prime who performed with Lyons, was nothing short of unbelievable during his individual routine.

While “breaking” Goode performed feats of strength contorting his body, spinning and jumping, many times atop one hand, and then whirling on his head.

Teresa “Toogie” Baracelo and Wendy “Wenrock” Lam added to the flavor of the B-boys with their own artistic flavor of breaking and popping melded in with modern dance, contact improve, ballet, and circus forms.

Then they combined their dance together and it seemed to resemble a street form of ballet.

“What we like do is show that even though it is done with classical and neo-classical music, it is all done with hip hop vocabulary,” Lyons said. “It’s just taking it in a different direction and flipping it off of its head. Ultimately storytelling is storytelling whether it is abstract or obvious. It is powerful. It doesn’t matter what movement or what vocabulary you use to tell it. So when you have the whole bunch, you can almost forget about and just enjoy the interaction and the relationship between the people on stage.”

Lyons was invited by the City of Santa Monica to headline the afternoon festival, and even though Lux Aeterna had never done an outdoor show where they had to mix an interactive portion with choreography and street dance before on a stage, their “winged” performance resembled what could be imagined as a street version of Cirque du Soleil.

Attendees also learnt about recreational classes offered by the City and how to incorporate fitness into everyday life as well as discover local resources offered by a variety of organizations.