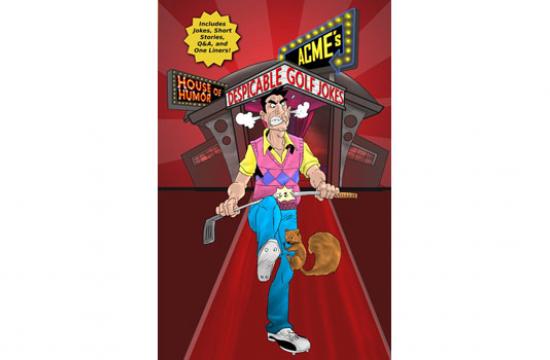 The books are by specific topic, ranging from “Despicable Golf Jokes” to “Trust Me: Lawyer Jokes.”

All 10 books are now available for download through Amazon’s Kindle program, with other electronic formats soon to follow. Each book is priced $1.99.

Schwartz, a veteran in the entertainment business where he continues to represent, buys and sells entertainment content to Viacom, 20th Century Fox, Lionsgate, and many others.

He has also produced more than 25 documentaries and eight animated specials, including “Snow White and the Magic Mirror” and “Secret of the Hunchback.”

More books are in the pipeline, including “Depends-Able Senior Jokes” and “Totally Twisted Holiday Jokes.”

“During these very uneasy and unpredictable times our books should sell like hotcakes…covered in chocolate…left in the sun….sprinkled with crushed nuts…with a wallop of whipped cream, a side order of mint-chocolate chip ice cream….served at a nice table…in a five star hotel…in Bel Air,” Schwartz joked.

“Over the last 10 years, my attorney and I have culled through over 5,000 jokes to assemble the absolute funniest one-liners, short stories, and good ‘ol fashion jokes according to specific subject matter. Now we have the ability to reach millions and millions of people who desperately need a good laugh for no particular reason.”

He said these joke books cost less than most greeting cards and contained more than 100 times the amount of content.

“Instead of taking the high road, we found a deserted dirt path full of road-kill, bumps and blind curves…for it seemed like a good idea at the time,” he said. “Truthfully, the response has been wonderful…already I’ve heard from long lost family members, bill collectors and suppliers of 100 percent pink slime!”