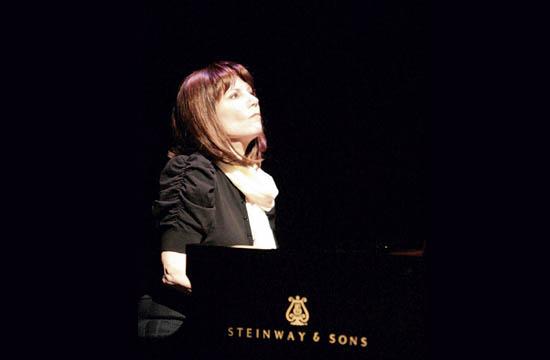 “The Pianist of Willesden Lane,” a world premiere production being presented at the Audrey Skirball Kenis Theater at the Geffen Playhouse, is a spellbinding musical journey into the life of piano virtuoso Mona Golabek’s gifted mother, Lisa Jura. It is set against the backdrop of the horror of World War II, but don’t shrink away for this is a tribute to overcoming the most horrendous circumstances to emerge victoriously in reaching a life’s goal.

Adapted and directed by Hershey Felder from Miss Golabek’s book “The Children of Willesden Lane,” the play is performed on a simple but highly utilitarian set designed by David Buess and Trevor Hay. It consists of a grand piano, a giant oval, and square gold-edged picture frames, which serve the rear screen projections used throughout the play and depicts portraits of Lisa’s family as well as some of the atrocious street scenes of Nazi terror.

The play begins with Golabek addressing the audience and giving some historical background on her mother before taking us back to 1938 Nazi-occupied Vienna and seamlessly transitioning into Lisa at age 15. Now fully in character as Lisa, she breaks the fourth wall and begins telling her story – punctuating the pure prose poetry narrative with exquisite classical compositions from Bach to Grieg, to Beethoven, to Debussy, and, of course, Chopin, each piece supporting the particular unfolding event.

Lisa is a protégé studying with her professor. During a lesson, he sadly tells her that he can no longer be her teacher as the Nazis have forbidden teaching Jewish children. He says he’s not a hero and must comply. It should be noted that Golabek transforms herself physically and vocally, assuming a variety of accents and physicality filling the stage with the multiple unseen characters that move in and out of her young life.

Following the infamous Kristallnacht, or the night of broken glass during which thousands of Jewish synagogues, businesses, and homes were vandalized or destroyed and Jews were attacked in the streets subjecting them to public humiliation by stripping them naked, Lisa’s parents decide of their two daughters, to send her instead of her sister Renee to the safety of England on the Kindertransport, which was created to save as many children as possible. Her father, Abraham, won a spot on a train in a card game and, despite the wrenching act of leaving her family, Lisa consents to go. Portraits of the family are flashed in one of the picture frames as the they take her to the train station, the shrill blast of the train whistle bringing to life the painful image of a family being torn apart. Before Lisa gets on the train, her mother makes her promise to keep doing her music and she pledges to do so. This promise is what drives young Lisa through the next few years.

Only 15, Lisa arrives in Liverpool with the expectation of staying with her father’s cousin, but he tells her he doesn’t have room for her and she winds up at Peacock Manor with other rescued children. That turns out to not be a long-term placement as Lisa is forbidden to play the piano and leaves, eventually arriving at a hostel run by a sympathetic Mrs. Cohen who, again, Golabek makes so real that you can plainly see her. This is a comfortable place for Lisa, who eventually gets a job in a factory and, encouraged by Mrs. Cohen and the other children, practices the piano – sometimes with the sound of bombs falling eclipsing the beautiful sounds of her playing. But once again tragedy strikes and the hostel is destroyed during a bombing attack. Mrs. Cohen pledges to rebuild, which she does. One year later, the children are reunited and everyone encourages Lisa to prepare to audition for the London Royal Academy of Music, which she does.

During this period, Lisa’s new piano teacher, in order to protect her gifted hands, secures a job for her playing the piano for veterans from the RAF, France, and Yanks at the Howard Hotel. It is there that she meets a French lieutenant who takes one look at her and becomes smitten. This young lieutenant eventually will play a major role in Lisa’s life. The audition goes well, the war finally ends, and Lisa is preparing for her dream to make her to debut – a promise she made and keeps.

Felder’s familiar theatrical device of breaking the fourth wall and segueing into an appropriate composition is used throughout the hour and 40-minute play and, as the drama builds, never gets tiresome. The production is supported by an excellent technical team, which includes projection design by Greg Sowizdrzal and Andrew Wilder, lighting design by Chris Rynne, and sound design by Erik Carstensen.

An evening of award-winning concert pianist Mona Golabek caressing the piano with the touch of a genius, gracefully capturing every note with the appropriate dynamism would be a treat unto itself, but coupled with the compelling narrative, “The Pianist of Willesden Lane” is a mesmerizing theatrical event and a tribute to the resiliency and determination of one little girl who, despite impossible obstacles, pursues her dream to fruition. Yes, it will make you shed a tear or two, but it will also leave you feeling elated and as one character says, “Through all our dark times, we must never forget our humanity.”

By mirrormmg May 7, 2012
in Life and Arts
Related Posts