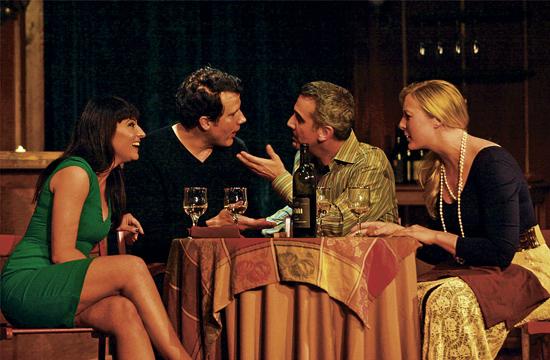 Who would have ever thought that “Sideways,” the multiple award-winning film based on Rex Pickett’s book, could be adapted for the stage. Well in fact, Pickett has adapted his novel and turned it into a captivating World Premiere theatrical version currently on stage at the Ruskin Group Theatre.

Brilliantly directed by Amelia Mulkey, the story revolves around Miles, marvelously played by John Colella, who captures the complexity of his character, and Jack, played by Jonathan Bray, who has crawled inside the skin of his sometimes dastardly, but lovable character. The intellectually mismatched buddies are on a journey across the Santa Ynez wine country on one last wine-tasting spree before Jack ties the marital knot.

Colella’s Miles is a moody guy, hell bent on taking his wine tasting seriously. He is still depressed from his divorce, is shut down emotionally, and is quite apprehensive about the outcome of his novel. Will it be published or not? Through Colella’s multi-layered performance, even when we’re laughing at some of Rex’s hilarious lines, we feel Miles’ pathos and reticence to participate in the adventures Jack is so good at orchestrating. Jack, whose moral compass is, let’s say, off center, is equally hell bent but for him, it’s about getting as much sex as possible before he settles in for a lifetime of making love to just one woman and that’s where the theatrical fun begins.

The action moves along briskly and we meet Maya, played by Julia McIlvaine. She and Miles had a “thing,” and she is interested in rekindling a relationship. Maya is in training to become a sommelier and knows almost as much about wines as Miles and in an act of retaliation, has appropriated some her ex-husband’s very expensive wines, some of which sells in the thousands of dollars. Jack, in the meantime, meets the fiery Terra, played by Cloe Kromwell, with whom he immediately becomes smitten and soon the foursome begin to double date, which includes dinner with heavy drinking of the finest wines culminating in numerous steamy sexual encounters between Jack and Terra who seem to have fallen in love with each other. Jack is even considering calling off his wedding that is scheduled to take place in a few days. There are some hilariously funny scenes such as the hunting of wild boar and some very poignant scenes where Jack professes his love for Terra or the scene when Miles tells Maya that Jack is in fact getting married. Fireworks ensue.

Pickett’s masterful, super intelligent script, where every word is prose poetry, is filled with amusing lines such as Miles referring to Jack, “He’s an actor. I can only assume the worst,” or Terra’s line, “Shoot him in the dick so he can’t have children,” or Miles’ comic, but poignant line, “I can’t commit suicide, I’m too insignificant.” In the end, most of the characters land on their feet, sometimes sadder but wiser for their experience.

Besides putting together a talented acting ensemble, director Mulkey surrounded herself with an excellent technical team that enhances the production. Through the use of adding and/or subtracting symbolic set pieces, (different signs, miniature trees, fences) the extremely creative set design by CJ Strawn transforms the settings from various tasting rooms, to a bedroom, to a forest, and through the clever use of a white fabric streamer, to a wedding reception. Watch for the surprise appearance of two beds. You’ll never guess where they come from.

To creatively bridge the multiple set changes, the director has devised a most innovative device. She hired Kristelle Monterrosa as choreographer and also cast her as Libby, the take-charge head housekeeper who, without dialogue, instructs her “staff” on their part in removing and replacing set pieces. Her helpers includes Paul Denk who also gives a humorous performance as Chris the bartender, Hamilton Matthews as the amusing, slightly deranged Brad the “cracker,” and Carl Kocis as Charlie, who, in addition to playing a barkeep, literally dances his way through the set transitions, carefully placing set pieces in their appropriate spots and then twirling off stage. Under Monterrosa’s skillful choreography, instead of stopping the action between scenes, it actually drives the action forward without missing a beat.

What is particularly compelling about “Sideways,” is that the story touches on multiple aspects of the human condition, from the almost neurotic judgment of a wine connoisseur, to the disappointments we face in life, ranging from career disappointments, to divorce, and love, and all the complications and permutations inherent therein.

As an added treat for wine lovers, Pinot Noir wines are offered before curtain as well as during intermission from a variety of vineyards including Sonoma Coast Vineyard, Dunstan Wines, Sharp Cellars, Silver Mountain, Carlton Cellars, Domaine Gerbuaut, Gioia, Willamette Valley Vineyards, Bouchaine Vineyards, Roots Wines, Leucadia Red, Waits-Mast Family Cellars, Alysian. The entire event can best be described as a full-bodied evening of theatre and should be high on your list of plays to see.

As a footnote to the film that garnered 350 awards, including an Academy Award for the Best Adapted Screenplay, “Sideways” is considered one of the 101 greatest screenplays in the history of motion pictures and is honored with a plaque on the wall of the Writers Guild of America.

Performances Fridays and Saturdays at 8 p.m. and Sundays at 2 p.m. through July 22.

By mirrormmg June 2, 2012
in Life and Arts
Related Posts