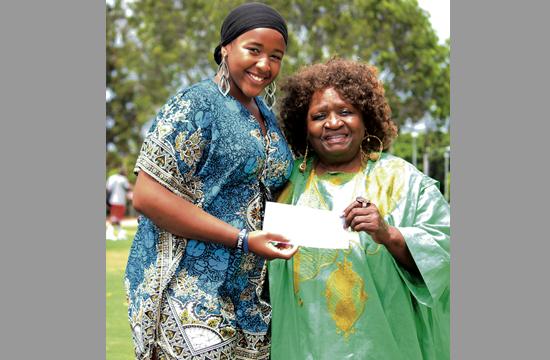 The 20th Annual Juneteenth Celebration in Santa Monica was held earlier this month at Virginia Avenue Park entertaining the many who came with their families to enjoy festivities celebrating the accomplishments of African Americans at the free community-building event.

Historically, Juneteenth represents and celebrates the day in 1865 when the last American slaves heard the news that they were freed from slavery nearly two years after Abraham Lincoln’s Emancipation Proclamation.

This year’s festival was in honor of Thelma Terry, a leader that dedicated her life to the development of youth in Santa Monica.

LaVerne Ross, founder of the Juneteenth Celebration in Santa Monica as well as founder of the Martin Luther King Education Foundation, presented prizes for the first annual Juneteenth Scholarship on the main stage to essay award winners who wrote on various topics about African Americans with winners that included eighth grader Elijah Conkrite of John Adams Middle School and Jessica Walker of Santa Monica High School.

“There were so many things that Jessica stated in her written composition about unfortunate and innocent African Americans, such as those in jail and incarcerated, that were to the ‘t’,” said Ross about Walker’s winning essay Wading in the Water. “It sounded like she had a masters degree.”

Conkrite, who plans to attend Santa Monica High School in the fall, wrote his essay about the Uprising of Slaves in the Educational System “even when it was illegal” arguing that “everybody should have equal rights to everything.”

Beyond the music and awards, everything from African figurines to jewelry, shirts, scarves, and purses was on sale inside of the various tents that were grouped around on the grounds of Virginia Avenue Park.

By mirrormmg June 25, 2012
in Life and Arts
Related Posts