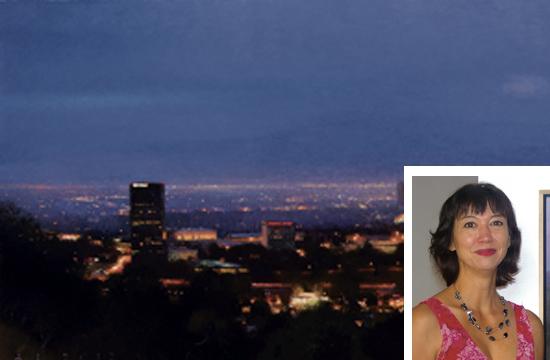 Though many artists attempt to master the technique of painting landscapes, few capture the brilliance and simple tranquility of nature like artist Ann Lofquist. Known for mingling modern day urban images with a nature’s resilient beauty, Lofquist has a knack for the making the obvious seem elusive.

Upon entering Skidmore Contemporary Gallery for its latest opening reception last Saturday, visitors were surrounded by the wistful plein-air paintings of Lofquist. Simply stunning, the exhibition transported me back to the memory of my first look at Los Angeles, from atop Mulholland Drive.

Lofquist sat down to talk about her inspiration.

“As a landscape painter, my initial inspiration is always something I see in nature…a perceptual experience,” Lofquist said. “I find I’m often attracted to the light in the late afternoon and evening. I then do a plein-air painting on site which serves as a reference for larger paintings which I complete in the studio over the course of weeks and months.”

Originally from Bethesda, Maryland, Lofquist spent more than 20 years in New England painting snow and winter seasons. Now after re-locating to Los Angeles, she finds a whole new environment calling out to her.

“Since moving to California, I have been painting urban vistas in Ventura and LA counties,” she said.

As if she is seeing it for the first time, Lofquist has the ability to step out of herself to capture what exists below the surface. This is one of her true gifts, allowing the ordinary to appear pristine. She slides between innovative and classical imagery all the time exposing the interaction between the two.

Inspired by her predecessors in the French Barbizon School and the 19th-centruy American painter, George Inness, Lofquist’s use of natural light such as twilight, dusk or dawn has become an integral part of the story. Her edification of the classic beauty of nature is refreshing in this modern day world. Though she lingers on transitions witnessed in her urban community, she does not lament, but merges the man-made with the natural thus creating a new genesis.

Lofquist’s landscapes capture a point in time and are frequently revisited reflecting continual changes. Though this ever-evolving world consistently presses upon our surrounding environment, Ann stresses through her art the importance of preservation.

“Being a painter in the 21st century, is often seen as anachronistic, but today we are so bombarded with virtual images that I think people hunger for something unique, crafted and physically real,” she said.

Lofquist’s latest exhibition will be on view through July 7 at Skidmore Contemporary Gallery (D2), located at Bergamot Station, 2525 Michigan Ave., in Santa Monica. For more information, visit skidmorecontemporaryart.com or call 310.828.5070.

By mirrormmg June 18, 2012
in Life and Arts
Related Posts