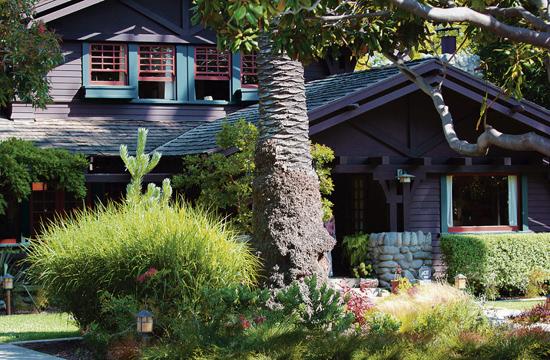 The Santa Monica Conservancy held its annual “Living in a Landmark” tour and reception Sunday that celebrated the architectural heritage of Santa Monica.

The event showcased six historical houses that have evolved and changed in order to meet the current needs of their successive owners.

Contrary to what many may think, these houses are not frozen in time, but are currently evolving with their occupants and owners who must follow certain architectural guidelines that preserve key design features in their redesigns in order to preserve their historical landmark status.

The former First Methodist Church has gone through many changes – it was even relocated from its original Sixth Street location where it was built in 1875. Since then it has not only been a church, but also a meeting hall for Civil War Veterans and a Progressive Club.

“There were several war veterans that met here from the Union Side,” said volunteer Thomasine Rogas who was on hand to aid the tours at the former Methodist Church.

“In 1923, the Methodist church was built next door and the building was decommissioned as a church and around then, civil war veterans met here.”

Charles Looff, a master carver who hand-carved the carousel at the Santa Monica Pier, lived in the adjoining house and his bedroom window can still be seen from the backyard of the former First Methodist Church.

A room on the second story of the house pays homage to the memory of female aviation pioneer Pancho Barnes who was a test pilot and member of the infamous Ninety-Nines.

Barnes is famous for breaking Amelia Earhart’s speed record in 1930 and her character has been immortalized in the 1983 Hollywood movie The Right Stuff.

According to Louis D’ Ella, co-owner of the Charles Warren Brown House, Pancho Barnes hung out in social circles with Howard Hughes and was “close friends” with Amelia Earhart.

Horatio West Court, which was built by famed architect Irving Gill, brings a European aesthetic to the West Coast with its modern white color and concrete circular arches even though it was built in 1919.

“It’s a masterpiece of Irvin Gill’s work,” said Barbara Whitney, owner of Horatio West Court. “It is clearly early modernism but it is taking details from prairie style architecture and from mission elements from Moorish architecture and he is almost doing a cubist geometry.”

The white building is a beautiful contrast to the scarlet bougainvillea that climbs up and around the outside of the house and seems to reach up towards the blue sky.

Inside and along the solid white walls of the stairwell, a single vase of purple iris flowers adds an eye-catching decorative element amplifying its color.

The house was restored as a condominium complex in 1973, and qualified for tax deductions as a national landmark under the Mills Act of 1974, later adopted by the City of Santa Monica in 1992.

The John and Anna George House was built on a hill site overlooking the ocean in 1911 and features an extensive front porch and spreading gables with a wide living room window.

Originally scheduled for demolition in 1980, Myra and Earl Pomerantz saved the building from destruction and remodeled it keeping its vintage dining room buffet in tact.

The George and Anna House was renovated by Architect Carl Day who added landscaping enhancements in the rear yard along with a pool.

The F.R. Siebert House was also built in 1911 and purchased by Victor and Diane Fresco in 1997.

The Frescos not only remodeled it in 1997, but also expanded the kitchen and added another bedroom in 2002.

According to Victor Fresco, the house was originally built for “$4,000 out of a kit.”

The F.R. Siebert House contains many design elements with a strong emphasis placed on structural wood beams and materials constructed out of wood and stone.

The Zimmers House built by architect John Byers in 1923 and later renovated by Bill Nicholas and John Dutton, is a classical example of an adobe Mexican Hacienda and is built with dual wings consisting of long halls and an open courtyard.

It features modern additions of a contemporary spacious kitchen with a family room overlooking an infinity pool to contrast its outside courtyard that has a magnificent view overlooking the Rivera Country Club.

From the vantage point of the newly added guestroom built in 2008, the J. Paul Getty Museum can be seen framed inside of the deep ravine between a large number of Eucalyptus trees atop the plush green grass of the championship golf course.

By mirrormmg June 12, 2012
in Life and Arts
Related Posts