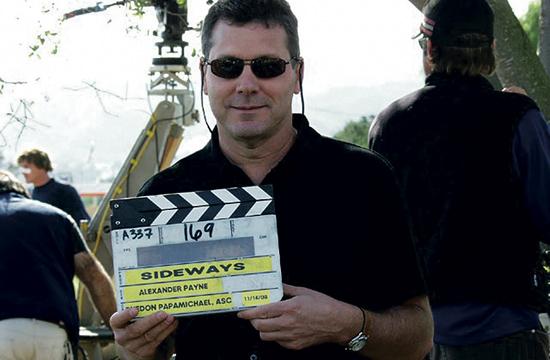 Rex Pickett is on the threshold of emerging as a theatrical star thanks to the overwhelming success of “Sideways” – The Play – which he adapted from his novel. In Part 1 of the three-part interview, Pickett talked in depth about his disappointing experience with St. Martin’s Press, the publishers of his novel that was eventually adapted for the screen by Jim Taylor and Alexander Payne, who also directed the iconic film that won 350 awards and is listed as one of the 101 all-time best films. With very little creative input in the filming of “Sideways,” Pickett’s theatrical role is quite different and he talks at great length about this rewarding experience.

The following exclusive interview has been edited for continuity and print purposes.

Congratulations. “Sideways” has just gone into its sixth sold-out week and was L.A. Weekly’s “Pick of the Week.” How did the stage version come about?

Pickett: Well, when they (Ruskin Group Theatre) approached me over a year ago, I knew I had to re-read the novel. After I sent it off to the copy editor, I never read it again and refused to do readings. So, I hadn’t looked at the words in seven years. I actually read it in one sitting and thought (a) first of all, it’s not that bad and (b) it’s a very dialogue-driven novel and because it’s dialogue driven, it lends itself to the stage and I can actually get more of my dialogue in. I wrote the first draft of the play in two and half weeks – 165 pages. It was just pulling stuff. I don’t have any experience in theater but because of my film point of view, do have a sense of scenes. Ruskin said this was by far the most challenging play they had ever mounted. It has 23 scenes, 50 lighting cues, 48 sounds cues, and they would have liked another week before opening.

What changes did you make from the first draft?

Pickett: Before I wrote it, I had asked it if there were any restrictions and they said there were none. So in the first draft, there were a lot of scenes, 14 characters and five phone conversations. They sat me down and said ‘Okay Rex, here’s how it works in theatre. We’re going to have to record the phone conversations or it will have to be an actress off stage.’ When I hear intelligent feedback, I immediately go to work, so I was never at odds with them. It was easy to remove the extra characters and make the phone call one sided. So it was about compression. The cold reads were long, but they were funny. I like entertaining people. You can sell despair if you make them laugh. This is quite different from the “Sideways” film experience because theatrically I control everything – from hiring the director to the casting and they can’t change a word without asking me. It’s been a wonderfully collaborative experience and I listen. I take criticism very well unless it’s really stupid or comes from left field.

Do you see the play moving to a larger space?

Pickett: We’ve gotten a lot of great reviews. What I realize is that this is the beta version and we’re workshopping it. There’s been talk about doing a road show that could be hugely successful. Remember, “Sideways” is a brand and the wine tasting aspect is enormous. Hundreds of people do the “Sideways” tour in the Santa Ynez Valley. I hope this doesn’t sound arrogant, but for $25 (the price of the theater ticket) just go to the Ruskin Group Theatre and you get the play and the wine tasting. Some of that wine by the glass would cost you $25. It’s a tremendous deal and I think it delivers on all levels. Winemakers love it because they can cross promote. As a matter of fact, I poured this past Sunday and introduced myself to the audience. I had the time of my life.

With “Sideways” being such a recognizable brand, coupled with the successful production at the Ruskin Group Theatre, what are the possibilities?

Pickett: The thing about “Sideways” is that it was a franchise before it was a play. The film is iconic and that’s not being a braggart. Everywhere I go almost everyone knows that film. I had to notarize some contracts the other day and this Polish woman in her late 50s asked me if I was a writer or something. When I told her I wrote “Sideways,” she said that was her favorite film. I get that all the time.

It’s a huge brand so imagine if we were to raise a lot of money and we had a set and went up to the Santa Ynez Valley, the play would be a sell-out. So there’s that. Then maybe take it to the Napa Playhouse. The other way to go is doing a production in theatres like the La Jolla Playhouse or South Coast Repertory or theatres in Toronto or London and see how it works in a 350-seat venue. I think the road show or regional theatre is something we can always do, but I’m leaning to go to Broadway eventually. I’ve been polling people and the play is definitely going to go somewhere. This is not the end. It’s just the beginning.

Do you see “Sideways” – The Play becoming a big commercial success?

Pickett: I’ve been told that we could monetize this in a big way and I would certainly like to monetize this because I never monetized “Sideways,” and that’s for sure. Everyone else made money, including the wine makers who made more money than I did.

Would you make a lot of changes to the script?

Pickett: I need to do it at least one more time to fix some things. It’s a comedy, but it has some deep stuff in it. I like the transitions and the scene changes, and while very nice, they are Amelia’s (Director, Amelia Mulkey) and not my voice. I love them and I love Amelia. She’s great. But on a bigger stage, we would do something different. I might even do something more cinematic, like rear screen projections.

How would you feel, let’s say, if you go to Broadway and it’s not well received?

Pickett: Because the brand is so huge, coupled with the wine tasting aspect, I don’t think it’s completely critic driven. In other words, the days are pretty much over when one reviewer slams you and that’s it.

That’s true. Look at the survival of “Spider-Man” which got the worst reviews.

Pickett: It’s actually making money after everything went wrong with it. Even “Death of a Salesman” which Ben Brantley (Chief theater critic of The New York Times) panned, is making money. You know 20 years ago if a play got a bad review in The Times, it could close that night. The Internet has kind of democratized it. When you got that newspaper delivered, the review was right in your face. Now you have to go searching for reviews.

(Despite mixed reviews, the Broadway revival of Arthur Miller’s “Death of a Salesman” starring Philip Seymour Hoffman, recouped its $3.1 million capitalization just 14 weeks into its run).

Being new to theater, what have you discovered that is quite different from film?

Pickett: If ever anyone suffered from low self-esteem, I highly recommend writing a hit play and going to the theater every night to sip wine with the audience members when the play concludes. Nothing like this is in novel writing, that’s for sure. With a hot film you have the premiere, but after that it’s just out there playing in random theaters – its success and wonderment and sense of discovery for others no longer palpable.

The play continues to sell out every weekend. It’s so much fun to go to the theater and just hang out. Best artistic experience of my life. The camaraderie, the palpable joy of the patrons, the wonderful cast and crew, is unlike anything in novel or film writing I’ve ever experienced before. I’ve met so many great people and discovered this wellspring of passion for the arts that I didn’t even really know existed. The theatre audiences tend to be slightly older because it’s more a part of their upbringing. I think this could be a play that could get young people to discover how wonderful theatre is. So, I eagerly look forward to the weekends. Writing can be so lonely so it is nice to be around people and I love that aspect of this theatrical experience.

By mirrormmg June 27, 2012
in Life and Arts
Related Posts