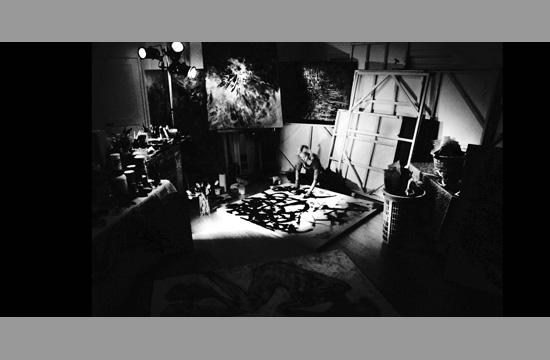 Destiny – some believe we are here for a reason, led by fate. Others wander in circles lamenting their choices. Still others forge ahead aimlessly, while many believe our actions determine the mark we leave on this world.

For artist Julienne Johnson, creating has empowered her spirit and fueled her passion in every area of the arts. Following her inner voice and stepping into her own destiny, the Grammy-nominated songwriter has been creating, consistently for years, in multiple arenas. She has made an impact on music fans across the country, and is also a published poet. Her music, poetry, and life choices have led her back to the place where she began – the visual arts.

Her latest exhibition, “Touch Me Touch You” features seven new paintings, further inspired by a recent trip to Doha, Qatar.

It opens this Tuesday, July 17 at TAG Gallery in Santa Monica alongside the works of artists Pam Douglas and Camey McGilvray through August 11.

As an artist, she dives right in, painting with her hands instead of brushes.

“The mixed media works consist of up to 30 layers of paint and glazes including oil, acrylic, pigment transfers, and collage,” Johnson said. “I don’t decide what I am going to paint. I bring myself to the studio and it pours through me, onto the canvas.”

This accomplished, driven artist has attracted the attention of several heavy hitters in the art world, in both the U.S and abroad, such as Peter Frank, associate editor of Fabrik Magazine, art critic for The Huffington Post.

Inspired by Frank’s writing and authority as an international art critic and curator, Johnson was excited when he asked to be the editor of her new book, “Ashes For Beauty.”

“Peter Frank was my first choice,” Johnson said. “I’d been a fan of his writing for a long time and he had earned my respect. Although we didn’t know each other, I knew he had curated shows from the Guggenheim to the Museo Reina Sofia in Madrid. Not to mention that he lectures all over the world. And he wants to come to my studio? I lost a lot of sleep just waiting for that moment. Yes, there’s affirmation in that.”

In return, Frank was struck by Johnson’s poise and her combination of youthfulness and experience.

“Her work impressed me with its own combination of raw confidence and formal strategy,” Frank said. “She knows how to put together a painting, even as she puts herself right in the middle of its fabrication. Julienne has the ability to put the world into her work while keeping the work highly personal and idiosyncratic.”

The opening reception and book signing takes place at TAG Gallery (D3) at Bergamot Station, located at 2525 Michigan Ave. in Santa Monica on Saturday, July 21 at 5 p.m. until 9 p.m.

A Q & A with artist Julienne Johnson will be held the following week on Wednesday, July 25 at 7 p.m.

By mirrormmg July 17, 2012
in Life and Arts
Related Posts