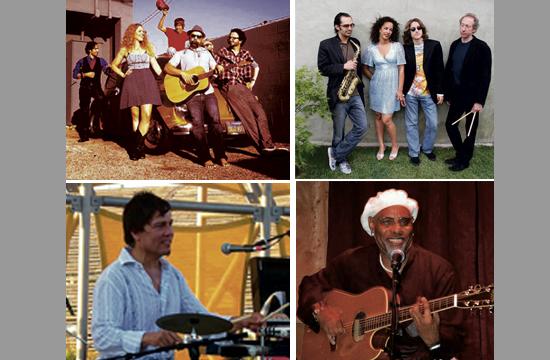 The 7th Annual Jazz on the Lawn summer concert series this year returns to Santa Monica, but at a new location – Stewart Street Park, located at 1836 Stewart Street.

Presented by Santa Monica Cultural Affairs during the month of August, residents are encouraged to bring a picnic, blanket, and beach chair to enjoy a sampling of free jazz from 5 p.m. to 7 p.m. each Sunday.

Cultural Affairs Supervisor Allison Ostrovsky explained why the event changed location, as it had previously been held in front of Santa Monica City Hall.

“There are two new parks that are being built, and one is Town Square, and that’s the immediate ground in front of City Hall where Jazz on the Lawn has previously taken place,” Ostrovsky said. “Originally construction was going to have started prior to Jazz on the Lawn, so we weren’t going to be able to hold it there. Since the wheels had already been put in motion to hold it else where, we decided to let this continue at Stewart Park even though construction outside City Hall has been put on hold.”

Each week features a different style of jazz.

On August 12, the Zane Musa Quartet will play a sax-led blend of traditional jazz with contemporary music.

The third Sunday of the month on August 19 is set to be extra special with a free salsa lesson at 4:30 p.m. prior to The Ronnie Gutierrez Band taking the stage with Leslie Paula who will perform old school salsa, cha cha, and Latin Jazz.

For the final concert on August 26, Rogelio Mitchell & Friends will play Calypso, reggae, soca, and jazz.

There will be several dessert vendors taking part each Sunday.

In addition to more space, Ostrovsky said Stewart Street Park amenities include a children’s playground, restrooms, and nearby parking.

“Each year the series seems to be growing,” Ostrovsky said. “Last year was our biggest year with about 300 or 400 people at each concert. This year it looks like it’s going to keep growing as we have bands that are little bit more well known and it is a bigger space.”

Dustbowl Revival is a Venice-based roots and jazz collective. Featuring a talented cross-section of both local jazz and bluegrass musicians, the band has toured the West bringing their unique blend of New Orleans swing, gypsy jazz, Appalachian folk and jug-band blues to rapturous audiences. With instrumentation that ranges from trombone, clarinet, tuba and trumpet to mandolin, fiddle and banjo it doesn’t take long for the crowd to get up and start dancing. Recently they won best Americana Song of the Year from the Independent Music Awards.

Ronnie Gutierrez is a versatile and talented percussionist and drummer whose band plays styles ranging from Afro Cuban and Brazilian to Latin jazz, including old school salsa and originals. Come early for a salsa lesson with Francisco & Stacey Martinez from The Dance Family Studio, from 4:30 p.m. to 5 p.m.

Panamanian-born Rogelio Mitchell has drawn from the musical styles of the Caribbean islands to create a sound rich in rhythm and harmony. With his unique blend of calypso, reggae, soca and jazz, Mitchell has toured extensively throughout Central and South America and has appeared at such festivals and music series’ as the Santa Barbara Jazz Festival, LACMA Latin Sounds, and the Distant Accords Awards.

By mirrormmg August 4, 2012
in Life and Arts
Related Posts