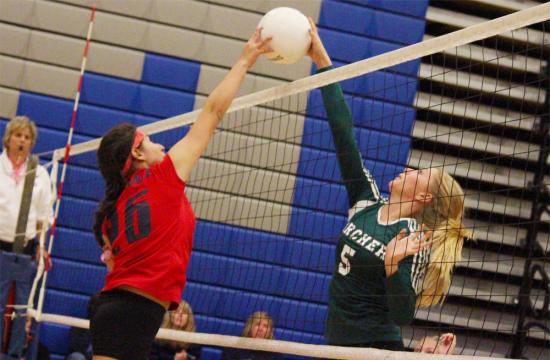 It was the second set in the Archer (9-3) versus Marshall High School (5-10) girls volleyball game at Santa Monica College Tuesday night, and the Eagles were up a point 27-26.

Archer outside hitter Maia Barnett had switched positions and was now a middle blocker stepping up in the right place at the right time with a massive block to stop a kill by Marshall’s Sarah Eguchi to tie the game at 27-27.

From there the Archer girls went to work and pounded away at the Eagles with two straight points set up on two consecutive serves from Marian Maile to win the second set 29-27 in a decisive moment that created a tempo shift.

Archer Volleyball Head Coach Jonathan Lotz thought Archer came out strong and then became a little complacent but were able to pull off the strong win in the end.

“I think we are a team that has gone up and down and needs a little bit of adversity in order to be successful,” said Lotz. “When we do get that challenge, the girls really step up and take their game to the next level, and I think that’s what happened today in that second set.”

Players that stepped up during the Archer versus Marshall match-up include outside hitters Jessica Culotti and junior Kirsten Avila.

“Jessica has been a real good utility player for us,” said Lotz. “If you need her to hop in the middle, she comes in the middle and gets blocks. Lately we have been playing her on the outside, and one of the great things about her is that it doesn’t have to be a perfect set for her to get her feet to the ball and get a kill.”

Lotz thinks that Avila, who has been on varsity since she was a freshman, has always “had that hammer where she can really crush a ball but hasn’t been consistent until now.”

“She’s really coming into her own,” said Lotz. “She is second on the team in kills, amd is a great asset to have. She is somebody who can side out to end a point.”

The win for the Panthers is their second against Marshall this month and solidifies their dominance as the number one team in the Delphic League with their only league loss to Milkin (10-5) early in the season.