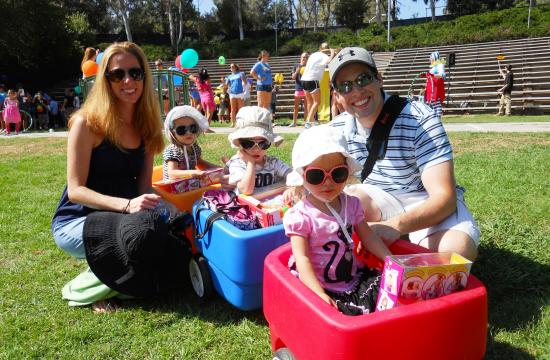 Stacey and Scott Kinsey are all too familiar with the Neonatal Intensive Care Unit (NICU) at UCLA Medical Center, Santa Monica.

The NICU cares for the most delicate newborns — those who are born early, some as early as 24 weeks and weighing only a pound or so, or those who are born closer to full-term but with serious health issues that need medical and/or surgical treatment.

The Simi Valley family’s first experience was in April 2010, when their first daughter Lucy was born at UCLA-Santa Monica at only 24 weeks and 5 days. She was so small ‑- just 12 inches long, weighing 1 pound, 8 ounces — that Scott’s wedding ring could fit on Lucy’s wrist like a bracelet. Lucy was subsequently transferred to the NICU at Mattel Children’s Hospital UCLA in Westwood, where she stayed for 4 ½ months before going home.

Then, in August of this year, after spending 120 days on bed rest at the Santa Monica campus, Stacey give birth to twins, Jake and Ruby, who were born at 34 weeks. Each twin spent about a month in the NICU before heading home.

But on Sunday, Oct. 7, the whole family got the chance to reunite with their nurses and physicians to thank them for their love and care at the 27th UCLA NICU Reunion.

The event, started in 1978, is now held every other year and includes families from both the Santa Monica and Westwood units.

“It’s so much fun to see how well our former patients are doing,” said Nancy Kearsley, a NICU nurse at UCLA-Santa Monica. “It is a joy for us to reconnect with the parents and hear their words of appreciation.”

The NICU on the Santa Monica campus takes care of about 160 babies a year. Last year, that number included 51 sets of twins and 4 sets of triplets.

Among the guests were Culver City residents David and Heather Gelb, who delivered triplets at UCLA-Santa Monica two years ago. The two girls and one boy arrived at 34 ½ weeks and stayed in the NICU for less than two weeks.

UCLA-Westwood’s NICU offers the most advanced interventions available for critically ill babies. Medical and surgical specialists are available 24 hours a day to address every possible physiological need. UCLA’s experts are also involved in neonatal research such as the early management of hypoxia (oxygen depletion) in newborns; innovative cardiac surgery within moments of birth; and neurological non-invasive monitoring that can detect brain malfunctioning.

The NICU also offers developmental interventions that enhance growth and promote maternal bonding; extensive resources to support breastfeeding; parenting support groups; and education and support for the transition from hospital to home.