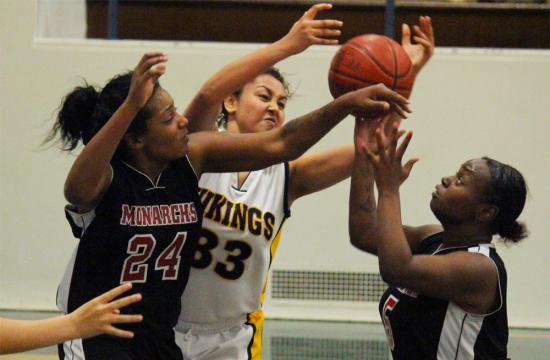 Samohi started off strong and by the beginning of the third quarter, Samohi guard Autumn McKinsey had pushed the score for the Vikings up to 21-12 after converting a free-throw.

By the end of the third quarter, Samohi guard Pharah Patterson scored a three-pointer to put the Vikings ahead 30-16.

But the Lady Monarchs weren’t out of the game just yet.

In the fourth quarter the Monarchs launched a come-back that started with Monarch’s Krishawnna Barker hitting two three-pointers in a row and guard Ronneshia Harvey adding a basket to put the game within five points at 40-35.

But Barker would miss her third three-point shot and Autumn McKinsey hit the final duece of the game to put out any chance of a Monarch comeback before time expired.

Next game for the Vikings is at home against Hawthorne Thursday at 6 p.m.