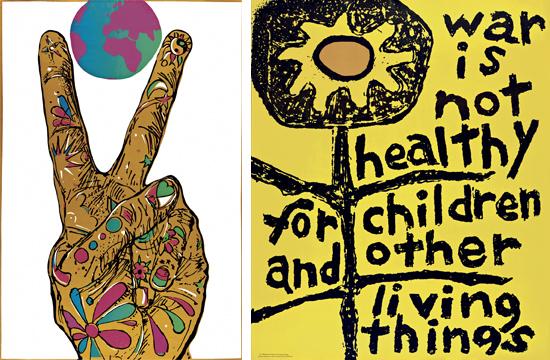 Art has often been influenced by politics. In the 1960s, the outcry of protest inspired persuasive iconic art. Memorable posters are the subject of Arena 1 Gallery’s newest show entitled “Decade of Dissent: Democracy in Action, 1965–1975.”

The group exhibition opened Feb. 23 and will remain on view through March 23.

Depending on your age, one cannot resist the emotional re-call triggered by these political posters.

Coordinated by the Center for the Study of Political Graphics, “Decade of Dissent: Democracy in Action, 1965–1975” will be featured in the annual Santa Monica Airport Art Walk on March 16.

“We thought it was extremely topical and we also wanted to recognize the artists who produced these works… created without the benefit of Photoshop or computers,” Frumkin said. “We also wanted to pay tribute to the incredible work of the Center for the Study of Political Graphics, which is an LA-based organization that collects and archives political posters from around the world. They have an amazing collection of mostly post WWII human rights and protest graphics that numbers 80,000 posters.”

If you haven’t been to Santa Monica Studios, it is a 22,000 square foot hangar, which includes Arena 1 Gallery as well as private art studio spaces.

The idea of creating the Santa Monica Studios was originally conceived by founder and artist, Yossi Govrin.

He soon partnered with Sherry Frumkin, and the project was approved by the City of Santa Monica back in 2000.

Frumkin said being an artist can be a “seriously lonely experience” and it was “easy to get locked inside one’s own work.”

“It is crucial for artists to talk about their work and see what other artists are doing,” she said. “For that reason when we started our project here, it was crucial that we provide both private studio space and public spaces where our artists are able to engage with each other and with some of the best contemporary art being created today.”

Over the past eight years, Santa Monica Studios has opened its doors to an eclectic range of local and international curators, who have coordinated group shows that include works from international artists from China, Australia, Mexico, Korea, and New Zealand.

For more information about the show, visit arena1gallery.com/decades-of-dissent-democracy-in-action-1960-1980-2.

For more information about the Center for the Study of Political Graphics, visit politicalgraphics.org/ home.html.