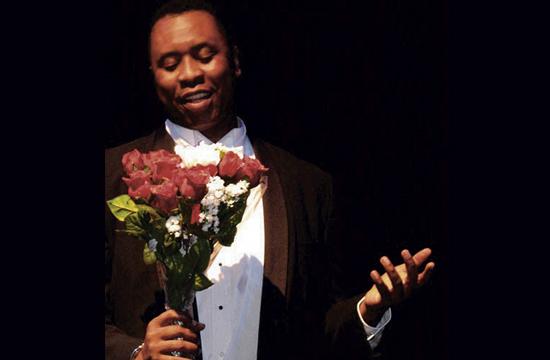 Santa Monica Playhouse presents a one night only return engagement of Stogie Kenyatta’s “The World is My Home – The Life of Paul Robeson” this Saturday, March 9.

The 8 pm solo show is about African-American artist/activist Paul Robeson and provides a powerful and poignant, entertaining and educational, heartfelt and humorous evening of theatre.

Robeson was witness to the artistic wonders of the Harlem Renaissance and the Jazz be-bop era, the horrors of the slave trade, the shame of the Holocaust, McCarthyism, blacklists, racism, and oppression.

“He was armed with nothing more than the strength of his convictions and his vision of a world where men live as brothers. His message was his life,” Kenyatta said. “He shows us that in spite of our differences, we still have more in common than we do in conflict.”

Kenyatta, who is Jamaican born and Brooklyn bred, wrote the show himself.

He is classically trained at the Afro American Studio in Harlem, the Henry St. Settlement and Al Fann Theatrical Ensemble.

He was a finalist in the New York State Theatre competition with Artistic Director John Houseman, then came west for college, where he studied screenwriting and political science at the University of California and later privately with Ivan Markota at the Van Mar Academy for Television & Film acting.

Kenyatta’s television credits cover everything from sitcoms and film to soap operas, from “Bernie Mac” and “Jake and the Fat Man” to HBO’s “Tyson” (co-star) to “The Bold and The Beautiful.”

As a comedian, Kenyatta has performed his stand-up routine – described as witty, sarcastic, and charming with a Caribbean flair – at comedy clubs around the country.

He co-headlined a USO comedy tour in Tokyo, Japan, and Okinawa and has also played in clubs on the Gulf of Mexico, the south of France, and London, England, as well as several Caribbean Islands.

Kenyatta said this show is one of the most challenging of his career and is the piece of work of which he is most proud.

It had its first performance at the National Civil Rights Museum, which led to a series of shows in St. Thomas and St. Croix sponsored by the Board of Education of the U.S. Virgin Islands. Subsequently, it has become the number one show on the American college scene.

Admission is $20. Tickets are available online at santamonicaplayhouse.secure.force.com/ticket or by calling 310.394.9779 ext. 1.

By mirrormmg March 8, 2013
in Life and Arts
Related Posts