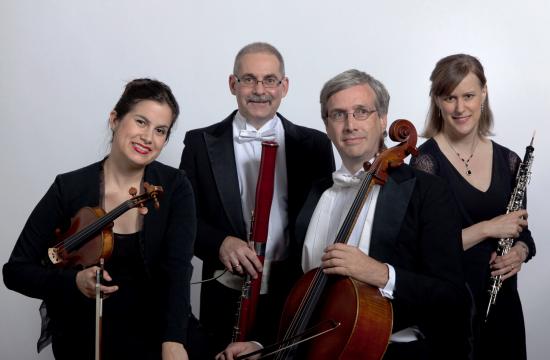 New West Symphony will host three concerts this weekend, with the third and final concert taking place at Barnum Hall in Santa Monica at 4 pm this Sunday, April 7.

The first performance will take place on Friday at 8 pm at the Oxnard Performing Arts Center, located at 800 Hobson Way in Oxnard.

The program will be repeated on Saturday at 8 pm at the Bank of America Performing Arts Center at the Thousand Oaks Civic Arts Plaza, located at 2100 Thousand Oaks Boulevard in Thousand Oaks.

A “Hear & Now Live” pre-concert discussion will be held one hour before each of the concerts. These lively and informative sessions discuss the music on the program. The programs are free and open to ticket holders for the respective performances.

As acting principal oboist, Wickes joined the New West Symphony in 2009. She also serves as principal oboe of the Santa Barbara Symphony and plays regularly with many orchestras in Southern California. She is active as a recording musician and can be heard on numerous film sound tracks.

As principal bassoonist, Massey joined the Symphony in September 2012. He also appears with many orchestras in the Los Angeles area. He is a graduate of the University of Southern California and has served as adjunct professor of bassoon at California State University Northridge.

As concertmaster, Belen joined the New West Symphony during the 2004/2005 season and was appointed to her current position at the beginning of the 2011/2012 season. She was the winner of the 2008 Sphinx Competition and appeared as a soloist with orchestras throughout the United States. Belen is a graduate of the USC Thornton School of Music and the Colburn Conservatory. She is now a member of the faculty at the Colburn School.

As principal cellist, Tanner joined the orchestra in that position in the 2001/2002 season. A graduate of Yale University, he has appeared as soloist with orchestras throughout the United States and performs extensively as a chamber musician. Tanner has also presented recitals and master classes in South America and South Korea.

As guest conductor, Eshkenazy was recently promoted to associate conductor of the Pacific Symphony after a three-year stint as assistant conductor. He is in his third season as music director and conductor of Fortissimo Fest, Bulgaria’s largest classical music festival. He regularly conducts Bulgaria’s major orchestras.

For Sunday’s performance, Barnum Hall is located on the campus of Santa Monica High School at 601 Pico Boulevard, Santa Monica.

By mirrormmg April 6, 2013
in Life and Arts
Related Posts