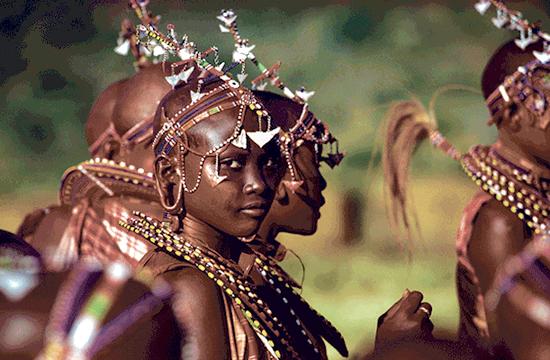 The exhibition will run through April 30.

These photographs are a selection from their Annenberg Space for Photography exhibit “No Strangers: Ancient Wisdom in a Modern World.”

Beckwith and Fisher have done more than anyone to awaken the world’s appreciation of everything African from adornment to the rapidly vanishing ceremonies.

The exhibition spans their three-decade relationship with the African continent across 270,000 miles and through remote corners of 40 countries in exploration of more than 150 African cultures.

The Beckwith-Fisher images are the result of a long, enduring, and deeply respectful relationship with African tribal people.

This, combined with their photographic skills, creates an intimate portrayal of ceremonies long held secret that might have never been recorded.

Their extraordinary photographs are recorded in 14 best-selling books.

Both are also winners of the Royal Geographical Society of London’s Cherry Kearton Medal for their contribution to the photographic recording of African ethnography and ritual.

The photographers have made four films about traditional Africa, including “Way of the Wodaabe” (1986), “The Painter and the Fighter,” and two programs for the Millennium Series Tribal Wisdom and the Modern World.

Numerous exhibitions of their photography and films have been shown in museums and galleries around the world.

In 2000 their Passages exhibition opened at the Brooklyn Museum of Art featuring 97 mural photographs, six video films, and a selection of African masks, sculpture, and jewelry. This exhibition has traveled to seven museums on three continents.

Frank Pictures Gallery is located at 2525 Michigan Ave. A5 (Bergamot Station). It is open Tuesday through Saturday from 11:30 am to 6:30 pm and by appointment.

By mirrormmg April 6, 2013
in Life and Arts
Related Posts