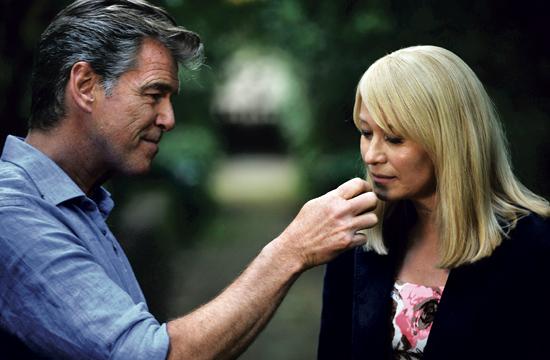 A most elegant Mr. Brosnan recently sat down with a select group of journalists to discuss his latest film in distribution – Academy Award-winning director Susanne Bier’s “Love Is All You Need.” The bilingual film, beautifully shot on location in Sorrento, Italy, revolves around a middle-aged widower Philip (Brosnan) and Ida (Trine Dryholm), a cancer-stricken woman who has been deserted by her husband who takes up with a much younger woman. The story is homage to finding new love in the most unexpected places with amazing performances by these two stars. The following has been edited for content and continuity.

You were such a fabulous James Bond. Do you miss being that super hero?

Brosnan: No, No. That was my day in the sun, but it’s another man’s job now. I have nothing but gratitude for being able to portray James Bond. What a dream to be part of that. But, like all dreams, they come to an end and you move on. I’ve been a working actor all my life and in some regards, it was just another job.

Speaking of another job, what was your experience like in “Love Is All You Need”?

Brosnan: Good segue. Oh this was a joy. I love Susanne Bier’s movies. This was a film that stole my heart in many regards and little did I know that I would be working with Trine (Dyrholm).

You’ve been touched personally by the tragedy of cancer and have been an activist. Is that one of the reasons you wanted to do this film?

Brosnan: Oh, I would say yes. This is a script that touched my heart and the character is so much me. I was acutely aware of the similarities of my life and this man’s life so how could I not know something about losing a wife and being a single parent. How it went, was the piece found me at the right time in my life, middle age, celebrating that, as a man, as an actor, and then the story was so beguiling and beautiful. So, one sets forth with the best intentions to make a film that will touch people’s hearts and also be entertaining.

Is love all you need?

Brosnan: Of course it ‘tis. It’s an essential part of our existence as human beings. Without it, where would we be? Love and only love – there’s so little of it. You read about the news of the world and there seems to be just devastation and brutality in our societies with respect to each other’s countries and religions.

We were told that when people found out you were in Sorrento, traffic stopped, and is making movies like just another day in the office?

Brosnan: Well, that wasn’t the case. I don’t think we stopped traffic. Sorrento is a very civilized town and a society of people, which is quite old in heritage, so we were left alone. It’s the tourists who can be a bit excitable. But, no, making movies is not just another day in the office. They’re so hard to make – it’s so hard to raise the money and then to do the job to the best of your ability and give 100 percent every day because there’s a lot of money involved. You give of your time, so I never take it lightly.

Pierce, how did you feel when you found out you would be working with one of Denmark’s most famous actresses?

Brosnan: I had seen Trine’s work and it was a powerful experience to see the way she conducts herself as an actress and the presence she has as a human being on screen and what she gives to her roles. So it was nerve racking for me and also knowing I was going into an arena of actors who were very much an ensemble. These men and women had known each other and had grown up together and it was a wonderful warm embrace, so you just revel in that. But, I was terrified. It’s always terrifying. It’s a constant constructing and destroying.

What are your goals as an actor?

Brosnan: I think I’ve done 69 films so you just keep going. You keep going and hopefully you’ll find work that is meaningful.

Of the 69 films that you’ve done, is there one character that lingered with you after the shoot?

Brosnan:  I think The Matador was one of those. My wife was concerned when I got back from Mexico City because I still had one of those chains around my neck. That said, my kind of acting is not like the Daniel Day-Lewis school of acting where he goes so deeply into a character. I think to maintain my own sanity, and that’s not to say that Daniel is otherwise, but we have a different style of acting. They do live with you. I mean you have a resonance.

Brosnan: I loved my days in Mexico City. I just love the Mexican way of life. The food. The people and hope to go back there and work again. I worked there many times with Remington Steele.

Did you always want to be an actor and was there a pivotal moment when you knew that’s what you wanted to do?

Brosnan: I was a commercial artist and loved movies and went all the time. One day I was hanging my coat up at work and one of the photographers invited me to a theatre club and I went along with him. Once I discovered that I had some bit of talent for it and could be effective on the stage, I wanted it 100 percent. I was 18 years of age and that was it.

What’s the name of the film you’ll be working on?

Brosnan: This is a movie that my company “Irish DreamTime” is making. It’s called The November Man from the Bill Granger books. It’s a spy movie and Roger Donaldson is directing and that’s what we’re going to do. It’s a cold war story and my character is a man who has been living a quiet life, but then is brought back into the game. We start filming May 20th.

How do you feel about turning 60?

Brosnan: Sixty is definitely significant. It has a ring to it and I have nothing but gratitude for coming down the road so far and still having a career and long may it last, that’s all I can say.

How will you celebrate your birthday?

Brosnan: Well last year, my wife Keely and I had just finished our house so we had a huge house-warming party and fifty-ninth birthday party. So this time, I think we’re just going to go up to northern California for a quiet weekend and I’ll ask her if she would marry me again. That’s a good one, right? I’ve already worked that one on her. So it’s just going to be the two of us, that’s it.