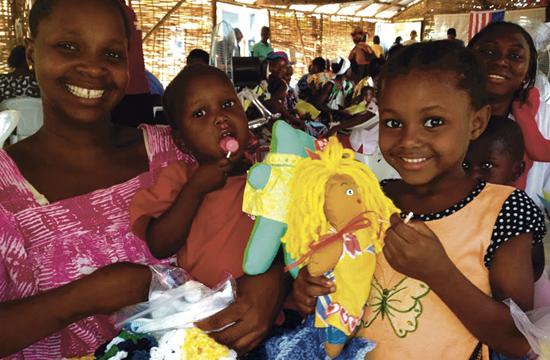 In the past 15 years, Santa Monica pediatrician Bob Hamilton has traveled to Africa 21 times on medical mission trips.

To help fund these ongoing trips, Dr. Hamilton has organized the fifth annual Walk To Africa fundraiser for Saturday, May 18.

A popular walk-a-thon among local residents, the event drew more than 800 participants last year starting on the beach at Crescent Bay Park, with a scenic eight-mile walk along the bluffs, San Vicente Boulevard, Montana Avenue, and back along the beach to the finish line.

This year there will also be a four-mile walk, a two-mile children’s walk, and a family fun zone for walkers aged 12 or younger.

Clowns, the TH3 Trips youth rock band, games, and prizes will be offered to keep everyone busy and having fun.

Dr. Hamilton founded Lighthouse Medical Missions when he first ventured to Gambia in 1987, and then on to help the severely wounded and maimed people of Sierra Leone after the Blood Diamond Wars.

He said the need was overwhelming for about a five-year period, but Lighthouse teams grew larger in response, with increased donations of supplies and gifts from Bug Bam, Crocs, the Hilton Foundation, and other interested groups.

He encouraged all humanitarian-minded people to take part in the upcoming Walk To Africa fundraiser on May 18 to help him continue the medical trips.

“We’re taking the blessing that we have here in Santa Monica and we’re taking it abroad to countries which are really poor,” Dr. Hamilton said. “We’re trying to bless the people of Africa.”

He said the short-term medical mission teams take medications, supplies, and offer tens of thousands worth of services for free.

“We essentially open a clinic wherever we can,” he said. “Typically we work with pastors at small churches or community centers. We’ve even set up in a court house and at an army barracks.”

He said 22 doctors, nurses, and lay people from California and other parts of the U.S. traveled to Gambia and broke off in a satellite team to the country of Guinea-Bissau.

“This small team of 10 was the first ever medical team in the country of Guinea-Bissau according to their Minister of Health and the acting U.S. Consular Liaison,” he said. “There is no formal embassy in this Portuguese-speaking country, which is overseen by the U.S. Embassy in Dakar, Senegal. As a matter of fact, after a 10 hour bus ride, the medications were held up at the border for nearly two-and-a-half hours before being released with a police escort.”

In only four days, the medical team treated 1,000 patients, who were diagnosed with active malaria and HIV.

“Guinea-Bissau has no public health system or active children’s immunization program, with very little privatized medical treatment,” he said. “I saw many birth defects that could have been prevented if the child had received medical care at birth. Malnutrition bordering on starvation, worms, high blood pressure, and chronic skin diseases along with open wounds from burning trash are common.”

Registration for the upcoming Walk to Africa fundraiser is $35 per person ($30 for children aged 12 and younger).

For more information on Lighthouse Medical Missions and how you can help raise monies through Walk To Africa, visit  www.walktoafrica.com and www.lighthousemedicalmissions.com.