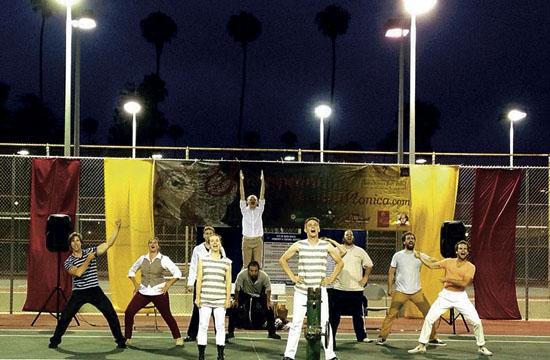 “Shakespeare is as much an attribute of summer as ice cream and BBQ,” commented Jessica Cusick, Cultural Affairs Manager for the City of Santa Monica, when talking about Shakespeare Santa Monica at Reed Park.

I think the Bard himself would have been pleased with the sounds of merriment coming from the laugh out loud audience at the Shakespeare Santa Monica performance of “Twelfth Night.”

The grown twins Viola and Sebastian are separated when their boat is shipwrecked. To survive until she can be reunited with her family Viola pretends to be a young man and goes into the service of the local duke, Orsino.

Viola promptly falls in love with Duke Orsino but he is in love with Countess Olivia. As part of her responsibilities Viola is required to woo Olivia on behalf of the duke when she would much rather be the one he wooed.

The complications of mistaken identity and the audience knowing the truth create great humor as the dramatic twists and turns of the play bring about its rightful end with the matching of the lovers.

We see Copeland again in The Taming of the Shrew, this time as Hortensio. Lillian Beaudoin is Kate. Her suitor, Petruchio, is played by Tim Halligan.

“The Taming of the Shrew is typically known as a battle of the sexes,” the play’s director, John Farmanesh-Bocca said. “Kate is a wounded bird – fighting for liberation. And the story is one of two people, each of whom is given to trouble and how they become paired. It is a case of a mischief maker finding another mischief maker and making a match.”

John Farmanesh-Bocca, who is also the Artistic Director of Not Man Apart, the parent company of Shakespeare Santa Monica, said, “To give perspective on the plays, in the late 1500’s and early 1600’s when these plays were first performed was also the time when the New World was being discovered and explored.” He went on to say, “‘Taming of the Shrew’ was an early play, simplistic, its adolescence is right there whereas ‘Twelfth Night’ is a complex and heart centric play.”

Not Man Apart Physical Theatre Ensemble is known for use of athleticism and dance to tell their story. They communicate character and plot through intense movement. All performers are both dancers and actors. Not Man Apart has produced plays at the Getty Villa, the Kirk Douglas Theater, and the Los Angeles Theater Center.

Every year they hold a “Fortnight Training.” Louis Schneeder, Chair of the Classical Studio at NYU and Jean-Louis Rodrique, Chair of Master’s Acting at UCLA join Farmanesh-Bocca in guiding the actors’ workshop and to form the ensemble for Shakespeare Santa Monica.

When the Shakespeare plays were first performed The Lord Chamberlain’s Men were the players. Often plays were staged in grass tennis courts with torches to light the action.

Shakespeare Santa Monica carries on the tradition by holding performances at the tennis court at Reed Park in Santa Monica.

I think and hope the physicality and athleticism, the antics and high jinks used in the telling of these enduring plays will make you laugh out loud in this fun romp through Shakespeare.

The last two shows of this summer’s season are this weekend with “Taming of the Shrew” playing tonight, Aug. 30 at 8 pm and “Twelfth Night” Saturday, Aug. 31 at 8 pm. Suggested donation is $20 and 18 and under have free admission.

For more information go to www.shakespearesantamonica.com.