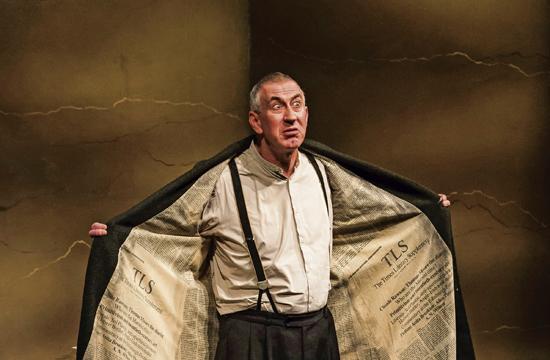 In an electrifying tour-de-force, Barry McGovern, one of the preeminent interpreters of the works of Samuel Beckett, flooded the Kirk Douglas Theatre with a tidal wave of some of the famed author/playwright’s most savory, provocative, and obtuse prose in “I’ll Go On,” compiled by McGovern and Gerry Dukes from a trilogy of novels written by Beckett: “Malloy,” “Malone Dies,” and “The Unnamable.”

Beckett’s name exploded with controversy, both in Europe and the United States, over his almost unfathomable “Waiting for Godot,” a minimalist play that defied and redefined traditional theatre, becoming part of a style of plays written predominantly by European playwrights in the late 1940s, 1950s, and 1960s known as Theatre of the Absurd.

Despite the initial lack of acceptance by critics and theatregoers, “Waiting for Godot,” was not only ultimately rewarded with the Nobel Prize for Literature, but also became the poster child for Absurdist Theatre, influencing such writers as Edward Albee, Jean Genet, David Mamet, Sam Shepard, and Harold Pinter.

Perhaps a simple way of explaining Beckett’s stylized writing, which was heavily influenced by his friend and mentor James Joyce, is that he played with abstractions and stream of consciousness to express the human condition, using the same approach in subsequent plays such as “Krapp’s Last Tape,” “Endgame,” and “Happy Days,” leaving it to audiences and critics to put the pieces of the complex puzzle together.

“I’ll Go On,” taken from a line from “The Unnamable,” is brilliantly directed by Colm Ó Briain, and begins with McGovern breaking the fourth wall and addressing the audience directly, commenting on the friendliness of the theatre but observing that, “You can’t leave because you’re afraid it might be worse elsewhere.”

The theatrical journey begins on a bleak, but interesting set designed by Robert Ballagh, which resembles an open book, accented with a thin line of lights running up and down the sides.

McGovern places himself squarely in the center of the “book,” almost in a Christ-like pose, and begins his first series of monologues excerpted from “Malloy,” taking us on his journey to visit his dying mother who he detests for having given birth to him.

As in “Waiting for Godot,” we see his adventures and misadventures in the form of imaginary encounters along the way, the first of which is with a policeman who arrests him for resting on his unseen bike with his also unseen crutches.

After he is forced to have a cup of tea and stale bread, he is released from jail commenting, “There’s no defense against a gesture of good will – you have to say yes.”

On his way once again, he runs over a dog with his bike but the owner, instead of being upset, thanks him as she was on her way to have the dog put down.

She does ask him to please help her bury him. He talks about his dangling testicles and how “They get in my way when I walk” later commenting that he “Smells like an old dog, not a dead dog.” You figure out the metaphors. As he shares more and more of his story, McGovern’s Malloy comments, “If I keep going on about my life, I’ll start believing it,” referring to it as, “The principles of advertising.” A particularly breathtaking speech, delivered with machine-gun rapidity, revolves around the placement and removal of 16 stones from four different pockets. Each stone, after being individually sucked, must be placed in a different pocket, so that it is not sucked twice. Delivered both with the complications of an Einstein mathematical equation, and perhaps with the confusion of Abbot and Costello’s “Who’s on First” routine, the audience roared their approval at the end of the monologue.

In Act II, dressed in a long white shroud, McGovern spews out excerpts from “Malone Dies” and “The Unnamable,” focusing on death and dying. Lying atop what looks like a marble slab, he comments, “I shall soon be dead,” and “I could die today if I made a little effort,” and “Let me say before I go, I forgive nobody.” Commenting about his mother, he says, “I’m looking for my mother so I can kill her…. should have thought of that before I was born,” and “Born of a wet dream and dead by the morning.”

One of Ireland’s finest actors, Barry McGovern’s performance is a classroom for any actor who wants to create and play against imaginary characters, for he doesn’t use any trickery to bring to life the unseen members of the cast, each of whom is fully actualized, with an unique inner life and specific physical and vocal characteristics.

McGovern’s finally tuned physical and vocal instruments spewed out hundreds and hundreds of words in an effortless rapid-fire delivery before a breathless audience at the conclusion of which, they sprung to their feet with a thunderous roar of applause. This is truly an extraordinary evening of theatre – not to be missed.

By mirrormmg January 27, 2014
in Life and Arts
Related Posts