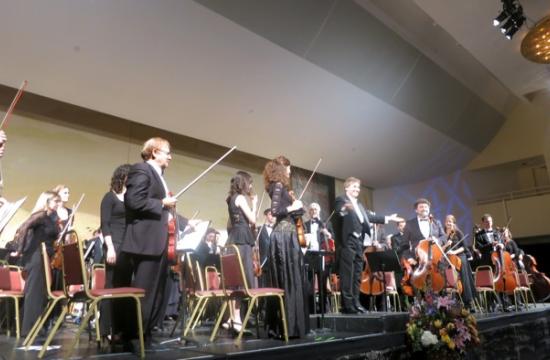 Honoring the Rev. Dr. Martin Luther King Jr. in a fresh yet meaningful manner on his birthday can be a challenge for any symphony orchestra. Yet, the Santa Monica Symphony Orchestra, led by Guido Lamell, Music Director and Conductor, met the challenge brilliantly Saturday night at the SGI Auditorium in SMSO’s traditional Martin Luther King holiday concert.

Three works were chosen, all arguably having a relationship to the life and principle of Dr. King: a rarely performed work by an almost forgotten African-American composer, a work inspired by the Swiss liberation from Austrian oppression in the 1300s, and one that is perhaps the best known work of symphonic jazz.

Just three years after Dr. King was born in 1929, the “Harlem Symphony” was composed. It was premiered at Carnegie Hall in the 1940s. Then it was, regrettably, forgotten. In this wonderful 4-movement symphonic tone poem, African-American composer and jazz legend James Price Johnson created a naturalistic musical portrait of Harlem life.

We hear the trains and the life of Harlem streets in the first movement, “Subway Journey.”

In “Song of Harlem” Melissa Carrington enchanted us with her oboe as we feel the warm spring breezes. Clarinets led by Joel Nalewajek and trumpets with Paul Salvo brought the irrepressible swing rhythms in “Night Club” to dancin’ life.

Finally, in “Baptist Mission” the cellos and basses built excitement through seven variations of the hymn “I Want Jesus to Walk With Me.” Could Paul Robeson suddenly reappear to sing along? It is staggering to think this work was not played for so many years.

Telling us beforehand that, since the work, written as a jazz improvisational piece, expects improvisation, he, a jazzer, would comply, “consciously and in the spirit of Gershwin.”

Thus, just when you thought you knew what was coming next, there it was, a little bit of “Someone to Watch Over Me,” “Summertime,” and “I Got Plenty o’ Nuttin’.”

A bit of magic, since they were all written by Gershwin after the Rhapsody. Thankfully, Pezzone didn’t rush through the work, so we could feel the nuances and savor the familiar parts. There have been many “Rhapsody” performances, but rarely with this much delight, surprise, and invention. The orchestra helped immensely, playing with rich lushness. Ben Lulich, clarinetist, performed the iconic solos with true mastery.

Maestro Lamell worked to restrain the orchestra so the soloist could be heard, and mostly he succeeded.

Looking for an appropriate opening to the evening, Lamell chose the spirited “William Tell Overture,” by Gioachino Rossini, recalling the victorious Swiss battle of liberation over their Austrian oppressors.

“Perfect!” explained Lamell to the audience. “Very uplifting and in keeping with Dr. King’s life and work!”

The work begins with a soulful five-cello solo, beautifully led by guest principal cellist Armen Ksajikian. Melissa Carrington, now playing English horn, played the famous solo with allure, and then was joined by flutist Sherril Wood in one of the most difficult duets, impressively played. The trumpet fanfare – familiar to all as the theme of “The Lone Ranger” – is ever stirring, and became more immediate in the smaller SGI Auditorium. It was a triumphant and virtuoso performance by all.

At the end, we all joined together to sing “We Shall Overcome.”

It took on freshness with Pezzone’s jazzy introduction, and solos in between each verse by Matt Germaine, saxophone, Paul Salvo, trumpet, and jazz combo led by Sean Stackpoole. Their addition made the song’s words even more moving.

Many disappointed people had to be turned away from the SGI on Saturday night when the auditorium reached maximum allowable fire code limits. So come early to the next two concerts (March 9 and May 24), fortunately in the much larger Barnum Hall on the campus of Santa Monica High School.

By mirrormmg January 25, 2014
in Life and Arts
Related Posts