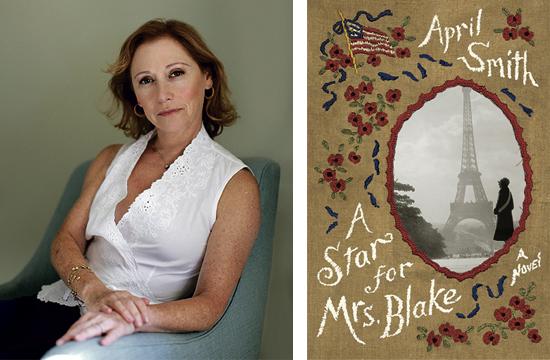 Taking readers to a world that existed generations ago is quite the difficult task, especially for an author whose key means of researching the stories she tells involves physically visiting to locations set in her books.

In “A Star For Mrs. Blake,” Santa Monica author April Smith takes her readers to a time in between two of the biggest wars the world has ever engaged.

Set in the 1930s, “A Star For Mrs. Blake” tells the story of five American women who travel to Paris to visit the respective graves of their sons, all soldiers who died in World War I. It is a story of a life-changing pilgrimage.

She spoke with The Mirror about the book.

With “A Star For Mrs. Blake,” what was your process to take readers back to the 1930s?

The facts of the Gold Star Mothers pilgrimages came from original source material I researched at the National Archives. The War Department kept precise records of the itineraries of the tours, including hotels and schedules for every city they visited, as well as daily reports on the women’s well being. For the writing style, I immersed myself in 1930s literature as well as first person interviews with women who lived during the depression recorded by the Maine Folklore Center.

What does the story tell us about the people alive in that era? Does any part of the story apply to our lives today? What do you hope readers takeaway from this story?

The story of mothers losing children to war is timeless, with special poignancy now, given our involvement in multiple wars overseas. Women alive in that era had far less political power than today and were cast in the supporting role of the grieving parent – certainly not as policy maker or president of a country. Hopefully readers will be moved by the difference between then and now and understand the courage it took for those Gold Star Mothers to embark on an unknown journey.

You are so thorough in how you bring your story to life, what with visiting the places you right about, talking to the locals, taking photos, and outlining everything on a whiteboard. How much of April Smith’s experience in these locales are in your stories? Beyond seeing the story through your eyes, how much of the story, if any of it, is your story?

It is my personal story as the mother of two children. Like every parent, I experienced the intimacy of childhood and the difficulty of separation as they grow, although thankfully not as dramatically as the women in this book. It’s my story as an ordinary person who has been through loss and grief as well as the affirmation of love.

That’s for the graduate students of the world to figure out. I do tend to speak out for the underdog; for those who submit to power because they don’t believe they have a voice.

Looking back, what has resonated with the most in your writing career, either professionally or personally? Of all you have seen and wrote about, has anything stood out to you more than anything else?

Respect for professionals who do their jobs with integrity, whether they’re FBI agents, cops, baseball scouts, lobstermen or just plain terrific moms and dads.

Lastly, please feel free to share any of your background. Your roots, your journey, your aspirations, your family?

I learned everything I know from growing up in the Bronx.

In addition to ‘A Star for Mrs. Blake,’ Smith also penned ‘Ana Grey Mystery/Thrillers,’ and ‘Be The One.’ More information about Smith is available on her website, aprilsmith.net.