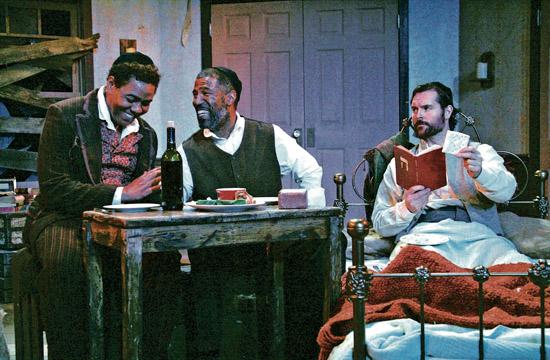 However, under the sharp, crisp, direction of Howard Teichman, their latest production, “The Whipping Man,” written by award-winning playwright Matthew Lopez, is a fascinating, complex, unique play, and by far one of the most provocative pieces of material the West Coast Jewish Theatre has produced.

“The Whipping Man,” is set in April 1865, following the end of the American Civil War. At rise, we see a severely wounded Confederate soldier painfully crawling across the floor of this dimly lit, war-ravaged home in Richmond, Virginia.

He has been shot in the leg and one of the DeLeon family’s former slaves, yarmulke-wearing Simon, played by an amazing Ricco Ross, aims a shotgun at this unknown stranger.

The severely wounded Caleb DeLeon, played by a most talented Shawn Savage, quickly reveals his identity as the son of the owners of the home.

He got shot in Petersburg, and soon learns that the rest of his family has fled to safer grounds, leaving Simon and John, the other freed slave, wonderfully played by Kirk Kelleykahn, in charge of guarding the home.

Upon finding out that this is the son of the former slave owner, Simon immediately begins to administer aid to the gangrene-infected leg, which he realizes must be amputated or else Caleb will die.

Caleb refuses to go to the hospital for reasons that are only hinted at. John, who also wears a yarmulke, enters the home bearing sacks of goods he “found,” including wine, but despite being a free man, he’s quite reluctant to actually leave the DeLeon home, the only home he’s ever known.

Despite Caleb’s pleading, the leg must be removed which, although masked by dim lighting, and good staging, was still painfully gruesome to hear. Although still devoted to the family, Simon asserts his newly won freedom by insisting that if Caleb wants him to do something, I must be asked and not ordered.

Simon, who is a deeply religious man, realizes it’s Passover and in spite of Caleb’s indifference, insists that a Seder must be conducted. So, even though there is a lack of the elements that go on a traditional Seder plate, this ritual, conducted by a black man, consisted of pilfered wine and an egg, a piece of hardtack given to solders, and uncooked collard greens, substituting for parsley. Contributing to the makeshift Seder table, John, in one of his many amusing moments, opens his burlap sack and produces dishes and flatware, which he “borrowed from Mrs. Taylor.”

Delivered with great emotion, this is one Seder you’ll never forget for it’s goose bump time as Simon sings the Jewish prayers in a thunderous, heart-breaking voice.

This scene is quite compelling and thought provoking as Simon sings “Let My People Go,” illustrating the strong parallels between the ancient Jews’ struggle with Pharaoh and the enslaved blacks. It also accounts for the bond that has existed between blacks and Jews, especially during the Civil Rights movement.

Despite all the horrors that had taken place for slaves, Simon still has a strong belief in God, which Caleb does not.

There is much verbal bantering between them with Simon saying such lines as “God is not a fair-weather friend,” or “A Jew talks to God – sometimes we argue with him,” or “Kiss my emancipated ass.”

Caleb declares that he fought to defend his home and looking around at the battered interior, John quips, “It looks like you didn’t do a very good job.”

Many philosophical issues are addressed such as John questioning, “Are we slaves or Jews?*

He also brings up the fact that he had been whipped by the whipping man because Mr. DeLeon did not approve of his friendship with his son and that Caleb actually took turns whipping John as well. Simon, in a very dramatic moment, finds out from John that his two girls, Sarah and Elizabeth, have been sold, which has a profound impact on both Caleb and Simon.

At the top of Act II, Caleb breaks the fourth wall and reads a heart breaking letter that he had sent to Sarah, with whom he is in love, and who is carrying his child, describing the stench of human feces and blood on the battlefield and that he longed to go home and read books again.

Simon is devastated when he finds out that President Lincoln has been killed, describing meeting Lincoln and how all the colored people followed him.  He remembered how he bowed his head to Lincoln and that Lincoln bowed back.

The acting by this talented cast is outstanding, beginning with the Ricco Ross’ powerful characterization as Simon.

He fills the stage with the gamut of visceral emotions, including his conflicted sense of devotion, which arises when learns that his family has been sold.  Should he stay and guard the home or should he leave and try to find his family? Kelleykahn’s John is a pivotal character who, at first, seems like comic relief but in due course, reveals shocking proof of his permanent physical scars, a living testament of the whippings he endured.  Shawn Savage’s strong performance as Caleb is actually the most tragic character as he has lost his faith, his family, his leg, and now is bedridden and beholden to his former slaves to care for him.

The production values are excellent with the action enhanced by Kurtis Bedford’s set design capturing the destruction of the DeLeon’s formerly beautiful home, and is further enhanced by a perfect light design by Ellen Monocroussos, Bill Froggatt’s sound design and Michele Young’s period costumes.

This is must-see production as Matthew Lopez’s original, most compelling script delves deeply into the dynamics between freed slaves and their masters, in this case, their Jewish masters* and the aftermath of emancipation, as seen through the eyes of these three characters.

* For most people, Jews actually owning slaves might seem incongruous, given their own history of “enslavement,” in one form or another, for centuries. A study commissioned by the Simon Wiesenthal Center revealed that, “Only 10 percent of the 150,000 American Jews at the time of the Civil War lived in the South. Southern Jews who owned slaves were overwhelmingly “small holders” and were concentrated in cities, not in the plantation districts containing ninety percent of the enslaved population. For example, there were only four Jews, less than one-tenth of one percent, among the 11,000 Southerners who, in 1830, owned fifty or more slaves.”

By mirrormmg February 24, 2014
in Life and Arts
Related Posts