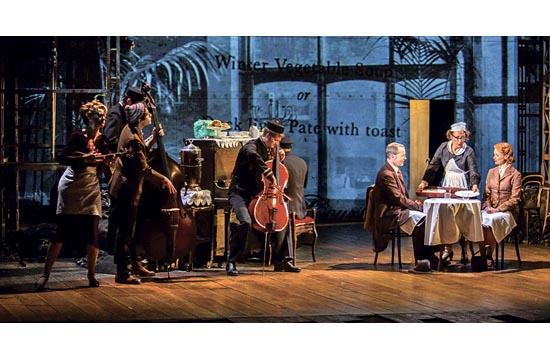 There are theatre purists who believe that like separation of church and state, there should also be a separation of stage and cinema.

For those folks who feel that it is a violation of the theatrical genre, please read no further for the UK’s Kneehigh production of Noël Coward’s

“Brief Encounter,” in its Los Angeles premiere at the Wallis Annenberg Center for Performing Arts Center, miraculously blends the two genres, creating an evening of what I would like to call Theatrical Cinema, resulting in a seamless blending of stage and screen.

The stage play, originally performed in England, and at the American Conservatory Theatre (A.C.T.) in San Francisco, is brilliantly adapted and directed by Emma Rice, and was culled from Noel Coward’s 1936 one-act play “Still Life,” and the 1945 classic film, “Brief Encounter,” unforgettably directed by David Lean and starred Trevor Howard and Ceila Johnson.

Set in 1938, this haunting love story revolves around two star-crossed lovers – Alec, a married doctor, beautifully brought to life by Jim Sturgeon, and also married Laura, a suburban housewife, delicately played by Hannah Yelland. They accidentally meet in the tearoom of a railway station where the good doctor removes a speck of dirt from Laura’s eye, which, if you’ll pardon me, was love at first sight. Laura and Alec begin a torrid, elicit love affair, awakening their long buried passion and excitement, which explodes to the surface in their secret trysts. We see Laura’s conflict as she begins to drift away from her loving husband as well as Alec’s torment as he contemplates a painful career decision.

The pre-play entertainment is set up by a band of wandering musicians and tap dancing usherettes who stroll through the audience singing songs from the 1930s, some of which, included “Honeysuckle Rose,” “I Can’t Give You Anything But Love,” and “Oh, You Beautiful Doll.” A mike would have been helpful as until they got on stage, it was difficult to hear them.

This technically highly stylized, dazzling production is aided and abetted by a top-notch cast who delivered Coward’s crisp dialogue in split-second timing, for even a nanosecond of hesitation could throw off the ensemble’s choreographed rhythm of both the dialogue and accompanying movement, all of which were executed perfectly in unison.

The outstanding cast of this talented ensemble gave a pitch perfect performance, and includes Joe Alessi, Dorothy Atkinson, David Brown (musician), Damon Daunno, James Gow (musician), and Annette McLaughlin as Myrtle, who is delightful as the proprietor of the tearoom predicting that the affair “will only end in tears.”

There’s an old show biz adage that says when a production lacks merit, you might leave the theatre humming the set, which in this case is amazingly designed by Neil Murray. With a set piece inserted here and there, the action basically takes place in the tearoom as well as the overhead railroad station, the living room of Laura’s home, and tryst locations. So, in this case, not only do you, metaphorically speaking, leave humming the set, you’ll leave humming the performances given by this remarkable cast, the talented musicians, and the mind-boggling special effects, which may very easily take your breath away. One example of interspersing live action with film clips is Alec saying goodbye to Laura on stage. He goes through an imaginary door and is now on the train that is being flashed across a huge screen on the back wall, and waves goodbye to Laura.  That device is used throughout the play where one moment the actor is on stage and the next, we see a the actor in the movie version with memorable scenes from the David Lean’s “Brief Encounter” sometimes overlaying the stage action, leaving the audience audibly “ooing” and “aahing.”

This production of “Brief Encounter,” is a love story embedded into a spectacular technical, multi-media design, enhancing the excellent performances given by this international ensemble of talented actors. This is a must-see evening of theatre as productions like this don’t come along very often- a rare treat on all levels.

By mirrormmg March 6, 2014
in Life and Arts
Related Posts