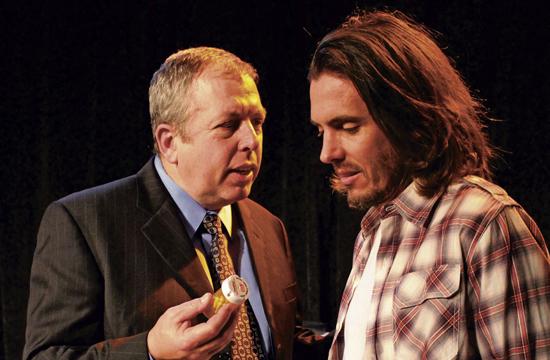 With the tragic death of Philip Seymour Hoffman from a cocktail of heroin, cocaine, and several other drugs, he became another number in the tens of thousands of people who succumb to deadly drug addiction annually.

His death, however, helped to illuminate just how serious the problem is and that it crosses all social and economic lines.

In the same vein of illustrating this problem, Steve Stajich’s “Co-Dependents: 2 Plays on Drugs,” which he wrote and directed, explores the tragic consequences of addiction which not only has sometimes tragic effects on the user, but impacts on the family as well.

He also shines a light on the almost evil practices by some drug companies who deliberately shape their advertising to soften the sometimes deadly side effects by using gentle words that minimize the latest drugs they are pushing.

The first of the two-handers is “Group,” which takes place in a rather mysterious meeting room in a hotel.

Cassie, well played by Ashley Love, is talking to eight empty chairs and introduces herself, “My name is Cassie and I’m an alcoholic.”

She laughs and says, “I’m just f…..g with you.” During her monologue, she confesses that she did drive under the influence and getting agitated continues, “I have it under control.”

Cassie is soon joined by David, well played by Shawn Boyd. He is quite reluctant to be there and declares, “This stuff never works.”

At first they don’t connect and their relationship is vague. In defense of his own addiction, he grills her about her problem and she finally admits that she can’t keep a boyfriend and again repeats, “My name is Cassie and I might have to change my drinking habits.”

She’s hooked on vodka and Paul Newman’s Lemonade, which she buys because the money goes to charity.

The accusations fly back and forth and David is clearly uncomfortable and wants to leave but for some reason can’t leave without her permission.

She goads him into speaking and he starts by saying, “My name is…” but can’t finish the sentence.

Cassie, who has some unexplained power over him, stands behind David, and manipulates him as if he were a puppet. He moves his mouth but she speaks the words.

We still don’t know why Cassie is so furious with him as she tells him he was a, “dirty junkie whore.” Apparently he had sex with men to pay for his habit.

Stajich’s narrative is compelling and slowly reveals their relationship, her anger is explained, and David’s overriding need for her to release him from her hold over him becomes clear in a surprising denouement.

The dialogue is crisp and some of the monologues border on prose poetry.

“Needed Language,” is the second play and revolves around Tom, effectively played by Ben Sharples and Carlisle, a sleazy pharmaceutical executive well acted by Frank Noon.

Tom is a former employee who was responsible for writing material that minimized side effects through the use of flowery double-speak language.

His old boss wants him to do one more camouflage job for a new drug he is about to introduce and offers him $200,000 and shakes a bottle of pills holding that out as further inducement. They go back and forth and Carlisle plays an unseen video of which we only hear the audio.

It is a funny, but a true riff on the multiple side effects of certain drugs that are described as, “Could lead to an absence of breath,” or a “sudden drop in life expectancy.”

Stajich’s outrage is apparent in both one acts, but in “Needed Language,” the narrative rests on that slippery slope of becoming diatribe vs. information through character revelations, which he successfully accomplishes in “Group.”

That said, even with some problems in the writing, Stajich has accomplished shining a light on the devastating effects of drug addiction, as well as the machinations to which a pharmaceutical company will go to downplay the sometimes-fatal side effects of their drugs.

It could be summed up in Carlisle’s defense of using rats for experiments saying…“They cost only thirty-seven cents a pound.”

As a sidebar, the FDA has just approved a new “Rescue Pen,” a  self-administered drug called Naloxone, which will be marketed under the name Evzio.

It can be used to reverse the deadly effects of overdosing from popular, strong painkillers or opioids such as Morphine, OxyContin, Vicodin, and Heroin.

Sadly this comes too late to save Hoffman, but perhaps will cut down on drug-related deaths, which according to the Centers for Disease Control and Prevention, has almost doubled between 2000 and 2010 from approximately 17,000 to 38,000.

By mirrormmg April 11, 2014
in Life and Arts
Related Posts