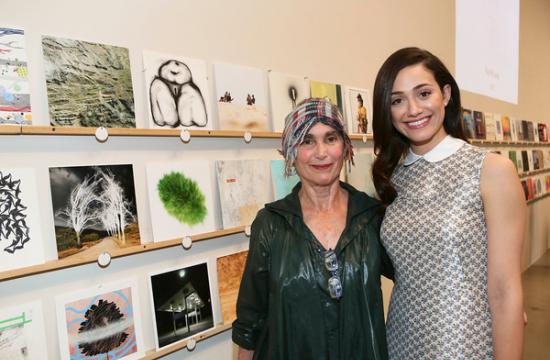 The event hosted over 250 members of the community, including Emmy Rossum, Tyra Banks, and Craig Ferguson.

Sellars acted as virtual emcee via this video, produced and directed by Jonathan Dayton and Valerie Faris (Little Miss Sunshine).

Bergamot Station development has been part of an active public process for the last few years, in anticipation of the train’s 2016 arrival.

The Santa Monica City Council’s vote on the major redevelopment plan for Bergamot Station will happen in the late Spring.

SMMoA has been named anchor tenant for the plan, and will act as a cultural beacon for riders from downtown to the sea.

The Museum’s executive team, board, and patrons are preparing for this transit-oriented renaissance with the launch of a public engagement initiative titled Train of Thoughts.

Train of Thoughts will launch during the Museum’s annual benefit art sale, INCOGNITO, with an artist project that collects input from guests.

The 18-month program includes public projects with some of L.A.’s most dynamic artists and creative thinkers–all with the aim to engage audiences in envisioning the region’s future cultural landscape along the Metro Expo Line.

By mirrormmg April 26, 2014
in Life and Arts
Related Posts