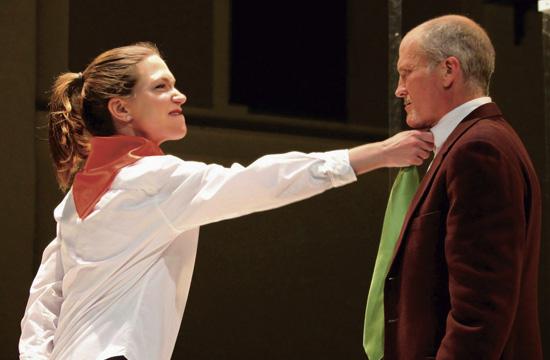 George Orwell was the prophet of Big Brother everywhere and his dystopian novel, “1984” painted a grim picture of what the world could expect.

Apropos that, and the recent leak of classified intelligence documents by Edward Snowden on our government’s questionable illegal global and domestic surveillance (which Snowden asserted that, “Even if you’re not doing anything wrong, you’re being watched and recorded”) the revival of Czech playwright Václav Havel’s “The Memorandum” not only deals with that particular subject, but also, through an absurdist, satirical eye, shines a light on the dehumanization of employees through corporate shenanigans.*

Under the impeccable direction of Jen Bloom, and a most uniformly talented Santa Monica Rep ensemble, the action takes place on Sean Cawelti’s very interesting set design which is comprised of several raised cage-like platforms, open on both sides, with the audience flanking either side of the stage, in a modified theatre-in-the round style.  The set pieces – a few green chairs and two tables – are rearranged by the actors, who gracefully move with the precision of a Swiss watch.

The opening action begins with a flurry of activity by the office staff – each one holding a tiny, transparent glass notebook, which, as they zig and zag across the stage, input data in a repetitive, highly stylized manner. On the wall is an electronic message center with a series of words and sentences that are unrecognizable, even if you do the L.A. Times Jumble every day.

Josef Gross, played extremely well by Bart Petty, is the Managing Director of this dubious corporation and his first encounter of the day is to be confronted by a duplicitous Jan Ballas, superbly played by Barbara Urich.  Ballas struts her feminine wiles like a stripper as she threatens him with exposing the fact that he took his rubber stamp home and let his kid play with it, and was probably in a lot of trouble. He assures her that he takes work home and that his kid only played with it a few times.

Ballas is conniving and tells him there might be a way out. She gleefully informs him that a new corporate language has been created called Ptydepe (puh-TIE-duh-pee) and that he if he signs a document mandating that this synthetic language become the official language of the corporation, then he would be off the hook about the rubber stamp. She insists that this language “Will make office communication more precise.” The undulating Ballas also informs him that a new surveillance system is going to be secretly installed to spy on the employees.

For her own hidden agenda, she needs Gross to sign off on the language mandate so through a lot of double-speak, cajoles him pointing out that the new Translation Center cannot begin classes until the Accounting Department sends them authorization, which can’t happen until Gross signs the requisite document. Ballas also informs him that he must sign a Personal Registration Document, which is required in order to get the translation of the memo written in his glass notebook. Illuminating bureaucratic foolishness, Gross is between a rock and a hard place as unless he signs the documents, he won’t be able to translate the memo sent to him so in his own self-interests, reluctantly complies, giving Ballas a checkmate in her sinister game of chess with an eventual boomerang consequence. Playwright Havel is a master at illustrating the absurd dehumanizing effects inherent in bureaucratic routines and round and round we go.

Urich’s characterization of Ballas is nothing short of mesmerizing, as she is the quintessential, backstabbing, corporate bitch who will go to any ends to claw her way to the top. She’s all smiles and sweetness on the outside but don’t turn your back on her for a second. Her mercurial transitions from sweet to sinister are quite seamless and one would seriously like to throttle her.

Ballas has a flunky in Ms. Pillar, played by an amazing Yael Berkovich, whose character is dressed in a very weird outfit, which includes a white laboratory smock and goggles.  She does not speak but through the actresses’ highly developed physical life, transmits through her body movements, exactly what she thinks and feels.

As the play moves forward, the staff is enthusiastic about learning Ptydepe and training begins with Lear, also played by a most versatile Yael Berkovich whose second character bears absolutely no resemblance to the mute Pillar. Lear, like Ballas, uses her feminine wiles to captivate the employees taking the unpronounceable jibberish “words” and turning them into graphic sex acts.

Sara Mayer’s character of the put-upon, suffering secretary Maria, run ragged by her nasty boss Helena, is portrayed by Tania Getty. Sara already knows Ptydepe and although forbidden to translate, eventually caves in to Gross’ pleadings and does translate the memo which has surprising consequences for the two of them, Ballas and eventually affects the entire staff.

The other highly skilled performers include William Charlton as Otto Stroll, the smug head of the Translation Center, Burl Moseley as Alex, Stroll’s arrogant lackey, Ewan Chung as Hans, whose only concern is when he can take his next break, and David Evan Stolworthy, who plays multiple characters, including Mr. Thumb, who is the smartest one in the Translation Center class and the special object of Lear’s seductive maneuvers.

Regarding the directorial choice of using of Vape “cigarettes,” Havel’s searing indictment of the breakdown of human relationships and the corrupt struggle for power inherent in both the corporate and political worlds, the use of the electronic cigarettes made the setting too contemporary as opposed to being timeless, which was probably Havel’s intention.

The play moves at breakneck speed and although performed as written, Act II could use some judicious cutting as it went far past the logical dénouement, became anti-climactic and I found myself capping and uncapping my pen several times. Remember, always leave the audience wanting more, not looking at their watches.

In ending this review, I leave you with one word – CHORUKOR! Don’t know what it means? Go see the play…

*It should be noted that in addition to being a playwright, Havel was an essayist, poet, dissident, and politician and became the ninth and last president of Czechoslovakia and the first President of the Czech Republic.

By mirrormmg April 3, 2014
in Life and Arts
Related Posts