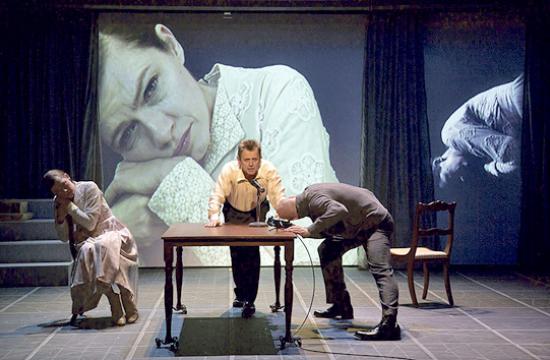 At the end of this play, a lot of the audience milled around the lobby asking each other if they could explain what just happened on the stage. People scratched their heads but all agreed it was a special treat to see the legendary Mikhail Baryshnikov, even if they didn’t understand the narrative.

That said, I will attempt to shine a light on “Man in a Case,” and “About Love,” which were adapted and directed by Paul Lazar and Annie-B Parson from two short stories by Anton Chekov, a 19th Century Russian master story teller who illuminated the challenges inherent in relationships and the trials tribulations of every day living, as explored in “The Seagull,” “The Cherry Orchard,” and “The Three Sisters.”

“Man in a Case” is the story of Belikov, an introverted gentleman played by the brilliant Baryshnikov.

This highly skilled actor truly captures all the subtle aspects of his character’s personality, an introverted man who teaches Greek in a local school and seems to have difficulty relating to others.

He is strict disciplinarian and compulsively neat. On returning home from work every day, for example, he ceremoniously unlocks the seven locks to his room, which is Peter Ksander’s set design consisting of set pieces, which are a mix of Victorian and high tech.

Dressed in a traditional long coat by costume designer Oana Botez, he very carefully, slowly removes one galosh at a time, then one glove at a time, placing each glove in a separate compartment.

His routine never varies and every morning he does the same series of brief physical exercises. Perhaps this was Chekhov’s comment on living a life of quiet desperation.

But I digress, as the opening should be commented upon. The stage was already full as the audience entered the theatre. Four gentlemen were seated at a conference table wearing jeans and tee shirts, which was the first confusing element, as they did not fit in with the time period that ultimately was being depicted.

With his back to the audience, Belikov is reading a book and not participating in the conversation, which begins with a discussion about turkey hunting, with Burkin, played by Jess Barbagallo, making a series of turkey sounds, which are amplified so that you’re getting a double dose of the same sound. (This will be elaborated on later in this review.) The other two gentlemen, who we must presume are also teachers, are played by Chris Giarmo as Ivan, who occasionally sings and plays the accordion, and Aaron Mattocks as Kovelenko, who is the brother of Belikov’s love interest, Barbara (Tymberly Canale.)

Her brother comments, “I never thought a man who wore galoshes in all kinds of weather is able to love.”

Encouraged by his colleagues to marry her, much to Belikov’s chagrin, a caricature depicting a sex act with Barbara is circulated causing him overwhelming embarrassment. Ultimately he becomes very depressed and, well, hence the title “Man in a Case” (think coffin). Baryshnikov truly captures the inner life of a basically painfully shy man stuck in the morass of his neurotic compulsiveness.

What was particularly confusing in the second half of the act was trying to figure out the names of the two characters, especially since Baryshnikov’s first character, well, let’s say, is in a permanent box from which there is no resurrection. In Chekov’s “About Love,” the names of the characters are Alehin and Anna.

Anyway, we know that it’s based on that play and perhaps serves as a look at moral ambiguity and unrequited love. The second protagonist, also played by Baryshnikov, has fallen in love with yet another Barbara, the wife of a colleague. He goes to visit her as often as they can both get together and with rear screen projections of the countryside, Baryshnikov, who has had very limited dance movements up to this point, does a stunning, slow, court-like dance with Barbara, revealing snippets of the elegance and grace of his years of masterful ballet performances.

His innate magnetism and perfection are also quite evident in his every non-dance movement throughout the play.

The soon-to-part lovers’ dance was very beautiful, very sensual, and heartbreakingly sad, as they know they are parting forever.

At the conclusion of the dance, they both lay prostrate on the stage with bodily gestures that symbolically indicate they are drifting apart and are touching for the last time.

This production is a high-tech melding of sound and intermittent angular dance movements by choreographer Annie-B Parson, some in the traditional genre but others, which could be described as an ultra-modern, highly stylistic folk ballet.

Jeff Larson’s video design, which punctuates the action throughout the play, is an interesting choice as it duplicates what is taking place on stage so that you see it live and on video at the same time, which I suppose is meant to “double your pleasure” or some deeper meaning that eludes your critic.

Tei Blow’s sound design amplifies the sound of a spoon dropping or footsteps into a thunderous explosion of sound that reverberates throughout the theatre. Rounding out the technical team are Lighting Designer Jennifer Tipton and Music Director Chris Giarmo.

Despite the ambiguous nature of a somewhat experimental “Man in a Case,” any chance to see Mikhail Baryshnikov on stage – whether dancing or not – is an opportunity not to be missed. Take a friend along to see this show as it makes for great post-production conversation.

By mirrormmg May 5, 2014
in Life and Arts
Related Posts