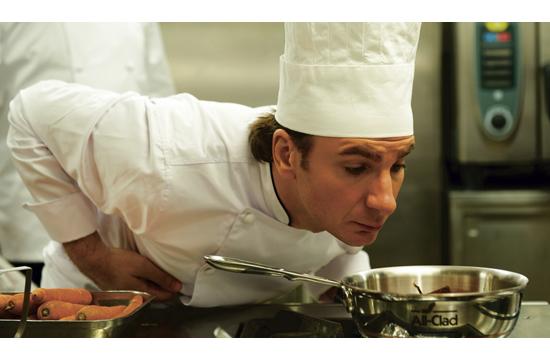 “Le Chef” is a delicious, starry-eyed food adventure that will keep you thoroughly entertained from the opening playful animated fruit and vegetables dancing to Nicola Piovani’s whimsical musical score, to the beautiful settings and mouth-watering close-ups of food served up by Director of Photography Robert Fraisse.

Brilliantly directed by Daniel Cohen, who elicits perfection from his cast, also wrote the clever screenplay with Olivier Dazat. The story revolves around Alexandre Lagarde, a highly respected three-star French chef played by a screen favorite Jean Reno, and a ne’er-do-well, brilliant, but unemployable chef Jacky, played to absolute soufflé perfection by Michaël Youn. A self-trained cook with haute-cuisine desires, he is a walking Google search on all things related to food and food preparation. He is fired from every job because of his unwillingness to compromise on his cooking and has to hide the latest firing from his beautiful girlfriend played by Raphaëlle Agogué,

Lagarde is on the verge of being forced out of his Cargo Lagarde restaurant by Stanislas Matter, CEO of the group that owns the famous eatery. The sinister Matter, villainously played by Julien Boisselier, feels Lagarde’s methods are outdated and he wants the spring menu to move away from classic French cuisine the trendy molecular gastronomy.

As cinematic luck would have it, Lagarde and Jackie’s paths accidentally cross and the intractable famous chef soon recognizes the young man’s genius, after he identifies every subtle or unsubtle ingredient by just sniffing the food. Jackie is just as intractable in his opinions and one of the funniest scenes in the film is while being televised for Lagarde’s weekly cooking show, Jackie refuses to put a sprig of rosemary as a garnish, hugging the plate close to his chest and backing away so Lagarde can’t defile it’s purity.

A big day is arriving when food critics will decide whether or not Lagarde’s restaurant still deserves the triple-star rating and in an effort to sabotage the preparation of any food, Stanislas indulges in a nasty bit of skullduggery, which could mean the end of both Lagarde and his restaurant. But don’t fret, the two chefs have finally found a common ground resulting in some pretzel-like twists and turns ultimately plopping the simmering CEO into boiling hot water, metaphorically speaking of course.

“Le Chef” will have cheering for the good guys and almost tempted to boo for the bad guy.  Oh yes.  Do have a light snack before viewing this mouth-watering, perfect cinematic confection as you’ll surely want to head to the nearest restaurant, preferably French, after the delectably satisfying dénouement.