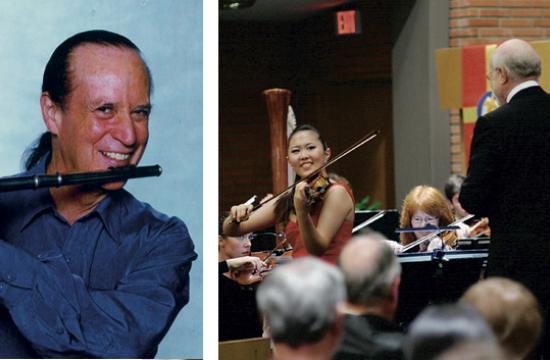 Orchestra Santa Monica will present its fourth and final concert of its 2013-2014 season this Saturday, May 31.

It will be held at 7:30 pm and feature the music by Weber, Ibert, and Schumann.

The orchestra under Music Director Allen Robert Gross will be performing this concert at its intimate concert venue at Mt. Olive Lutheran Church in Santa Monica.

“Ibert’s concerto is by turns dazzling and intimate, wistful and jazzy,” said OSM’s Music Director Allen Robert Gross. “Dave Shostac and I have worked on many concertos together over the years, and I always look forward to making music with him. He is a real poet on the instrument. French composers seem to have a special affinity for the sound and capabilities of the flute, and Dave brings out the most extraordinary colors from the instrument in this piece.”

Shostac was appointed principal flute of the Los Angeles Chamber Orchestra in 1975.

“Extraordinary, dazzling, world class” and “a musician of the highest order” are words critics have used to describe his artistry.

An alumnus of The Juilliard School and Tanglewood and recipient of two Rockefeller performance grants, he has also served as principal flute of the St. Louis, Milwaukee and New Orleans symphony orchestras.

Shostac has performed as a solo and orchestral player at the Hollywood Bowl and has taken part in the Ojai, Mostly Mozart, Aspen and Oregon Bach festivals; and has appeared with the American Symphony Orchestra, the Boston Symphony and the Los Angeles Philharmonic.

He has worked with prominent conductors such as Eugene Ormandy, Zubin Mehta, Leopold Stokowski, Seiji Ozawa, Karl Richter, Helmuth Rilling and Christopher Hogwood, among others.

His discography also includes JS Bach: The Six Flute Sonatas, Masterpieces from the French Repertoire, The Romantic Flute (volumes one and two, Bach’s Brandenburg Concertos, and a historic recording of Terry Riley’s In C.

The 2003 release by the Bel Arts Trio, of which Dave is a member, features the music of Gershwin, Bizet, Fauré, Rimsky-Korsakov and others.

His expanding list of credits includes Avatar, The Karate Kid and many others. He has taught at USC, UCLA, California Institute of the Arts, the Aspen Music School and the Idyllwild Arts Academy. He is a faculty member of CSU Northridge.

He performs at occasional jazz, Latin and country gigs.

Opening and closing the concert are two works from the German Romantic tradition, Weber’s overture to his last opera, Oberon, and Schumann’s First Symphony, subtitled “Spring.”

“The ‘Spring’ Symphony is a wonderful conclusion to our season,” said Executive Director Jennifer Frain. “It’s joyful and optimistic, which fits our mood right now at OSM as we finish our second successful season and look forward to next year.”

Orchestra Santa Monica will be announcing their 2014-2015 concert season this summer.

More information regarding this event can be found at OrchestraSantaMonica.org or by calling 310.525.7618.